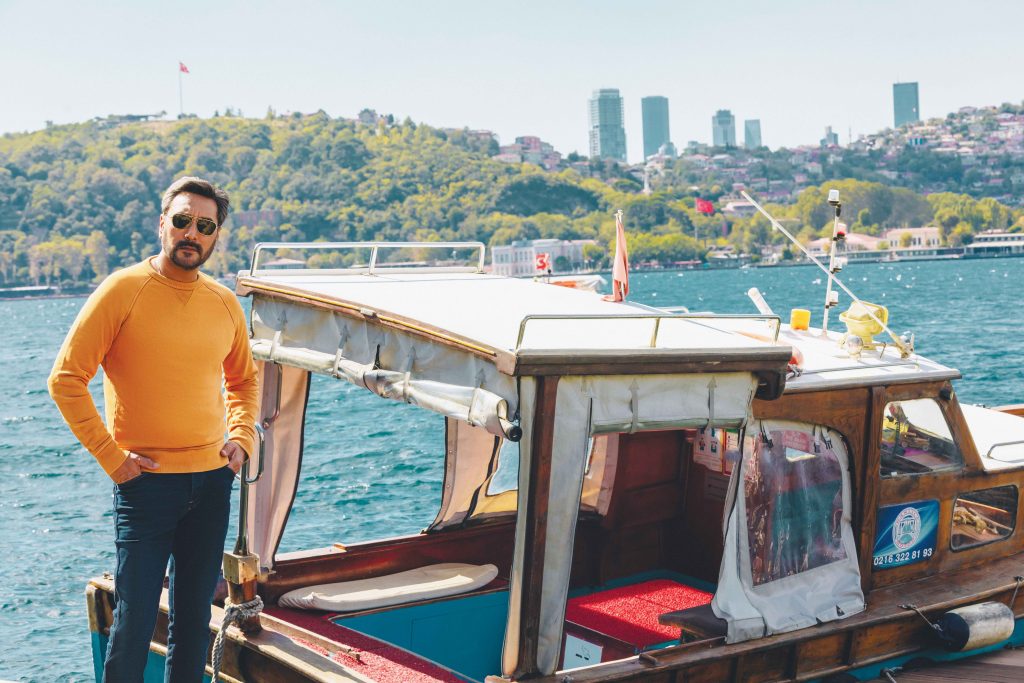 Artists may be good at what they do but very few take a chance to branch out into other creative spaces to heighten their craft. Adnan Siddiqui is one such name that comes to mind. He has found equal success as a model, producer and as an actor, which gives him a cutting-edge over his counterparts. Adnan has taken up challenging roles in a solid career spanning more than three decades. His nuanced performances in a range of roles are a testament to his versatility as a performer.
He also co-owns a production company Cereal Entertainment that looks to develop interesting concepts going forward. Dive deep into our pages to find out what our cover star makes of the contemporary challenges facing Pakistan’s entertainment industry.

Adnan, you are quite a popular star in Pakistan and have found success as a model, producer and as an actor. Which of these three subfields of the media world has truly fulfilled your purpose as an artist?
ADNAN SIDDIQUI: Success as a star and purpose as an artist cannot be equated. You are accepted by the audience, have a huge fan following, and may leave countless of them screaming in awe when you come on-screen. These are the decisive factors of a “successful star” in our industry. Is this my purpose as an artist? No. Can it be boxed in a straitjacket role of either a model, producer or an actor? No. It has been more than 30 years and I am still changing realms because it is a continuous journey, and I cannot isolate any of these.
Adnan Siddiqui has to be seen as an amalgamation of a model, an actor and a producer. I may become a director someday and the new role will be subsumed in my identity. The day you feel satisfied, you stunt your evolution as an artist, as a human being. You stop learning. Fulfilment is a mirage. 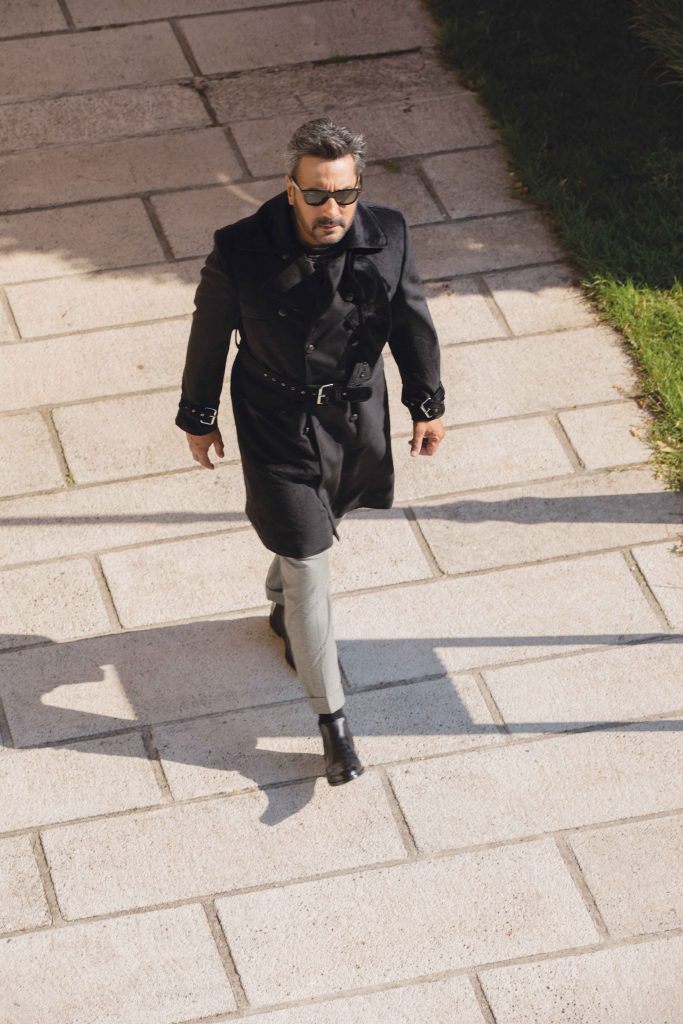 Storytelling is a powerful tool that can touch millions of lives. The medium itself should not be taken for granted. Do you feel that our producers, writers and directors are doing a disservice to the very fabric of storytelling with projects that predominantly revolve around monotonous themes such as adultery, extramarital affairs and household tussles? Why are we having a hard time progressing beyond these storylines?
AS: Entertainment business is a two-way street, hinged on demand and supply. This practice has existed since the beginning. Let’s go back in time. Most of the dramas during the early 80s and 90s focused on strong women leads, characters that were claiming their individuality and place in the society. Scriptwriters like the late Haseena Moin fleshed out confident young women in her stories. The producers made dramas reflective of the time and the audience demanded them too.
It would be unfair to squarely blame producers, writers and directors for shows based on redundant topics like adultery and family tussles. These issues are contemporaneous. A lot of power to make or break a concept is vested in the audience. Sometimes viewers do not respond to a good story because it is not formulaic. The global hit game show Who Wants to be a Millionaire? failed in Pakistan. What would a producer do if that happens? He has to earn his money.

Being an actor and a producer with the power to influence, have you been able to tell the stories you feel passionately about?
AS: An actor is always walking a fine edge when it comes to the choices he makes. Sometimes he picks up a story he believes in, on another occasion, it is the character that draws him more than the plot. He does it to sharpen his craft or as an ode to it, and some other time, he simply surrenders to the script and the director. You can’t always afford to tell stories you believe in, especially as an actor. Fortunately, I have the luxury to play a producer as well, which gives me room to explore themes that otherwise would not have been possible.

Over three years ago, you starred opposite the late legend Sridevi in Mom. What have you learned from her craft as an actor?
AS: Mom was my third film and Sridevi’s three hundredth. By that account, a novice was sharing space with a veteran. You expect an actress of her stature to have an air about her, walking on-sets with stiff upper lip arrogance. She was anything but that. Sridevi knew she was an icon but she didn’t impose her stardom on her co-stars. Her humility was awe-inspiring. Anyone can be a great actor. It is tough to be a great human being. 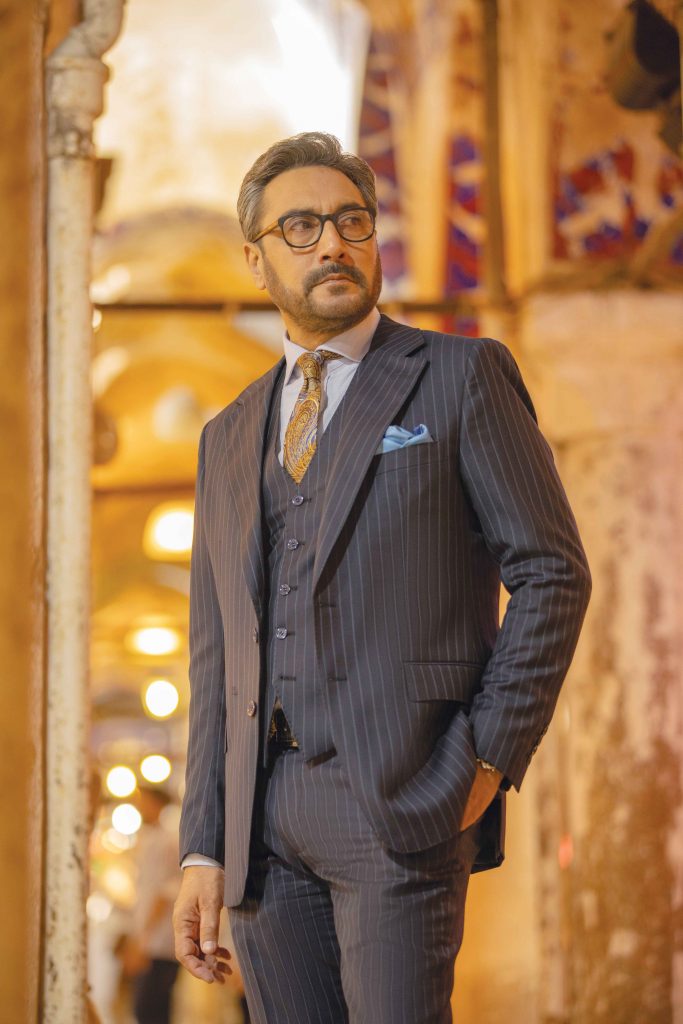 Do you feel that ageism is as prevalent an issue for male actors in Pakistan’s entertainment realm as it is for female artists? How so?
AS: The age debate has been a long-standing issue of the industry even before I became an actor, and perhaps, it would remain as such till we, as a society, evolve. A love story between an older man and a young girl is lapped up by the audience, as this norm is so seeped into our social constructs for multiple reasons. We are blindly following these ancient established norms. For the same reason, the audience will shake their heads in disbelief, tut-tut, and disdainfully reject the story if the romantic leads are reversed. Such dramas come very few and far in between because we have been conditioned that way. Our subconscious snubs the idea of an older woman and a young man in love, getting married.
Regardless of the fact that the dynamics surrounding ageism play in my favour being a male actor, I personally feel that we must experiment with scripts bringing this change. If we are championing equality in our new age dramas, we should not just show women stepping out to work. We must challenge the status quo. A woman lead in her 50s can romance a young man in his 30s. There is nothing abnormal about it. However, stereotypes won’t allow us to do so.
An older woman romancing a younger man is seen as a vamp or someone with a loose character. It has to do with our society’s idea of female sexuality. She is asserting her sexuality, her desire if she wants to be with a younger guy, which our conservative society might not accept. It still frowns upon women expressing their needs and natural instincts.

Let’s talk about nepotism specific to Pakistan’s entertainment business. It feels as though our industry is one large family with strong connections. We have the likes of Ahad Raza Mir, Zara Noor Abbas, Azaan Sami, Amar Khan and Shehzad and Momal Sheikh who have launched their careers because of their parents. Attempts are also being made by actors like Sheheryar Munawar and Naumaan Ijaz to bring Zaviyar and Manoucheher in the spotlight, which only raises more eyebrows. Many even try to justify nepotism but they are in fact, part of the problem. Do you feel that the issue at hand puts aspiring artists with no family connections of their own at a significant disadvantage?
AS: If one looks from an outsider’s point of view, young artists with no family connections in the industry do seem to be getting a raw deal as compared to someone who has that background. This will give him a jumpstart, and a good launch pad too. Ultimately, he or she will be judged for the work, not the surname. The surname will take you only as far. In our industry, your work ensures your worth. I was an “outsider” too, and I realized early on that there is no substitute for hard work. Your talent will be spotted irrespective of where you come from. 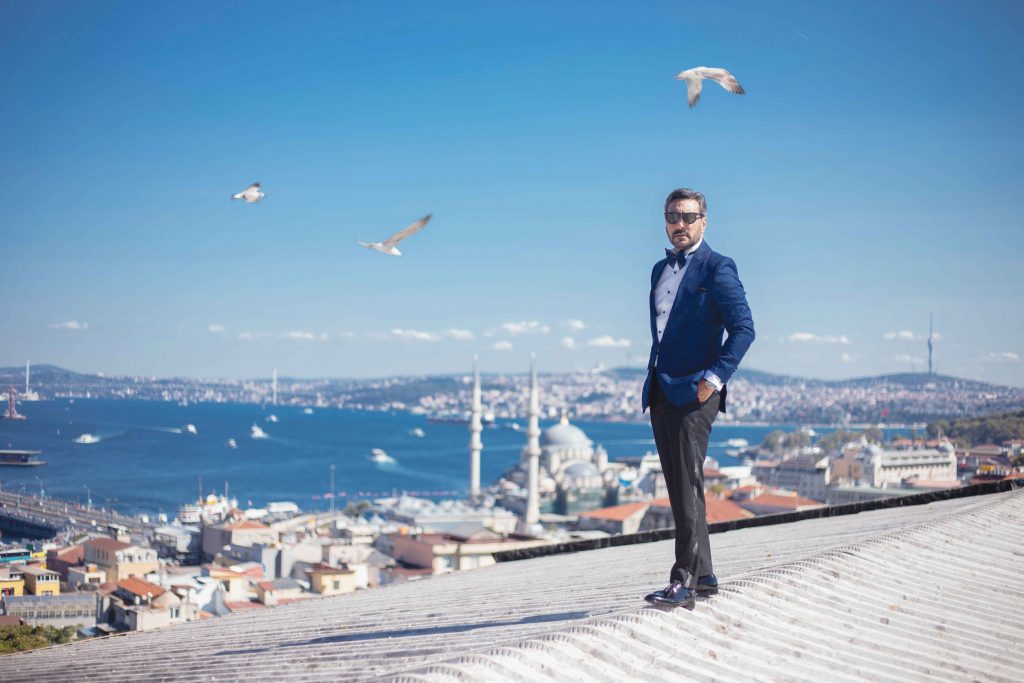 Do you plan to launch a platform for aspiring actors with considerable talent?
AS: My production house Cereal Entertainment is all about honing great talent. We conceived it with the sole aim of promoting artists, writers and directors who have the flair, yet have not got the right platform. We hope to promote such people who have fire in their belly but don’t have the privilege of walking into an audition simply by dropping names.

You have spent time on-sets longer than many contemporary artists out there. Tell us how and in what ways has the set culture in our industry changed over the course of two decades?
AS: This generation is all about multitasking; shoots, rehearsals, social media, parties – juggling all of them like a breeze. Also, they can work on multiple dramas simultaneously. In my time, PTV had the mandate that if you worked in one quarter, you couldn’t work in the next one. There was also a system to it. We made programmes at a languid pace, complete with dialogue and camera rehearsals. It is all a thing of the past. 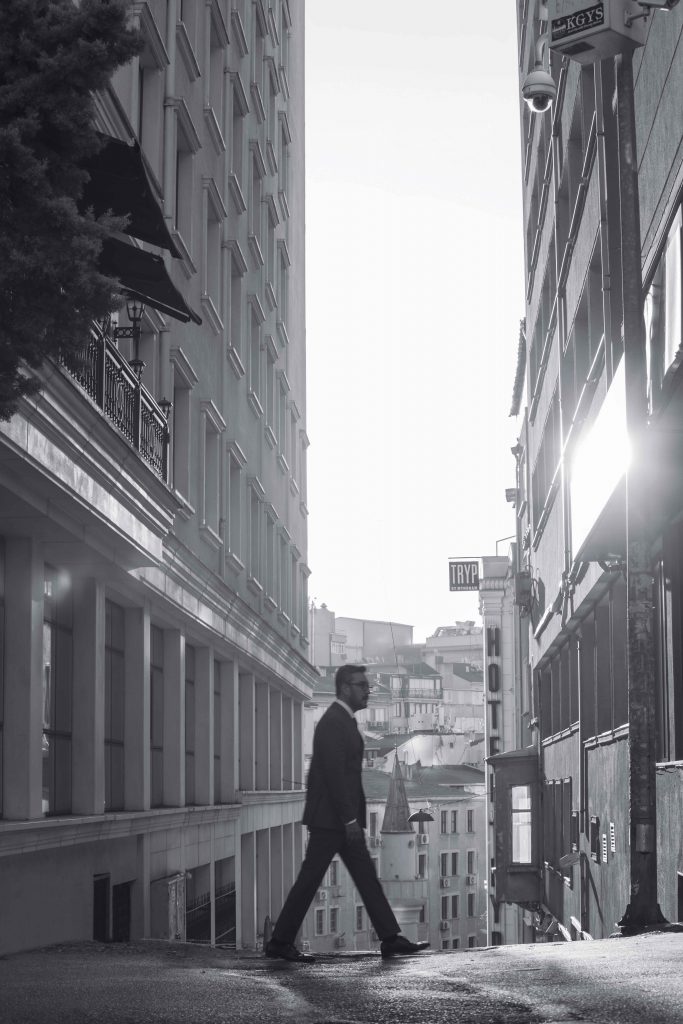 Do you feel that our films and dramas are at a standstill because we have prioritized TRPs and commercialization and have turned a blind eye to creativity and experimentation?
AS: TRPs and commercialization are a very binary criteria to judge a film or a drama. Are commercially successful movies or dramas mundane in storyline and vice versa? Meray Paas Tum Ho broke all TRP records because of its refreshing plot; a woman leaving her husband for her paramour. Khalil-Ur-Rehman experimented with a script that was critically acclaimed and loved by the masses too.

Can our industry sustain itself long-term with commercial films and dramas?
AS: We have been surviving since 1968 despite hitting a phase where our programmes looked unflattering imitation of Indian serials. We started following Star Plus while creating in-your-face content. Bright lights, loud makeup, weak scripts and bad production value, and yet, here we are.

Many productions have moved online with streaming services that offer a variety of movies and television shows to watch. Will social media help independent filmmakers find their voice as creatives in a space that allows them to thrive and to create what they have always wanted?
AS: OTT platforms are independent of PEMRA guidelines, and this would be the biggest draw for independent filmmakers who want to experiment creatively. A lot of them have already moved to these spaces as they respect creativity and give you a free hand to work. 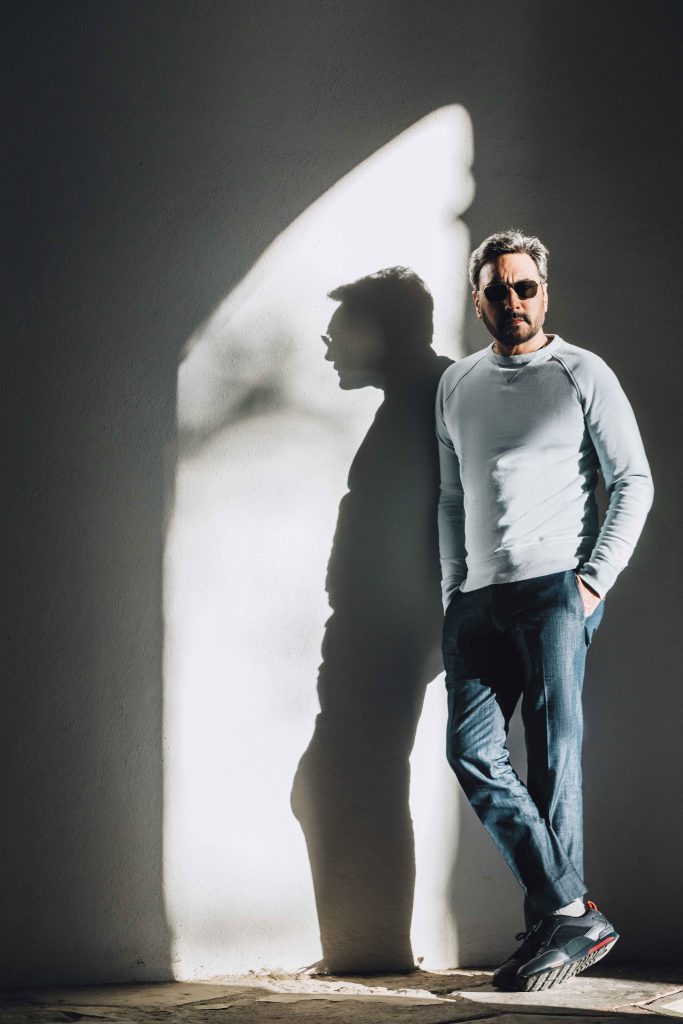 Talk to us about your new production ventures. What is in store?
AS: I am waiting to release my movie Dum Mastam, which I have produced under Cereal Entertainment. Once the pandemic passes over, we will plan new projects.

What are you planning next acting wise?
AS: I am still waiting for a character with substance, something I can dig my teeth into. It does not matter whether it is a cameo, protagonist or an antagonist.

What has the past year taught you?
AS: 2020 taught me that we can neither overpower nature nor can we know Allah’s plans. It also made me more patient, resilient and accepting towards things that I cannot change. Sometimes, it is best to surrender and let life take its own course. 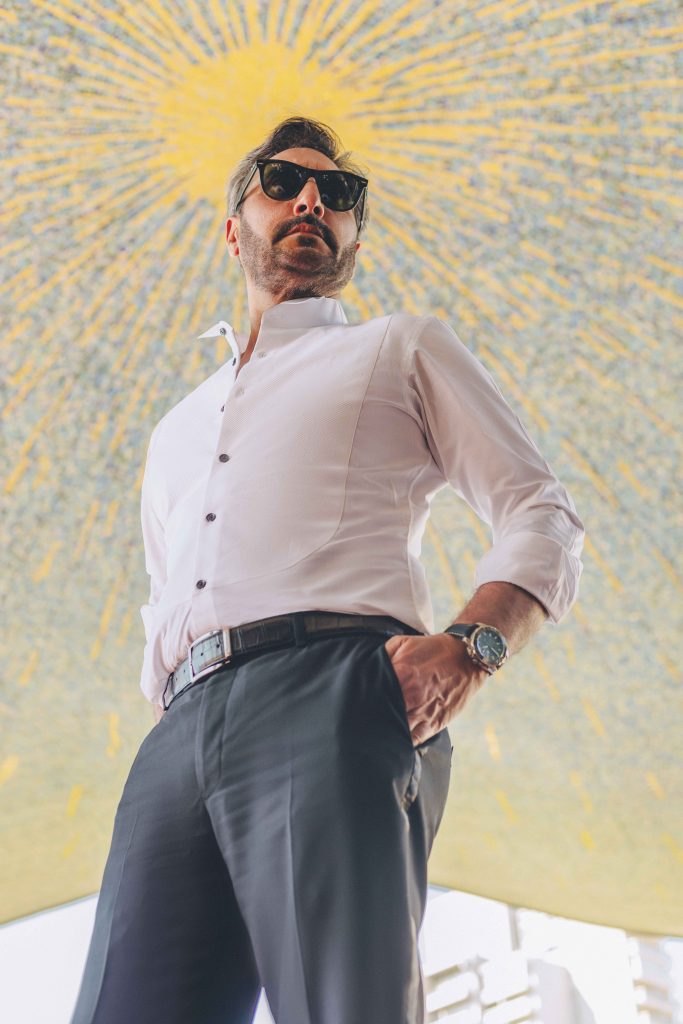 A colour you could wear all day, any day?
Black and white. 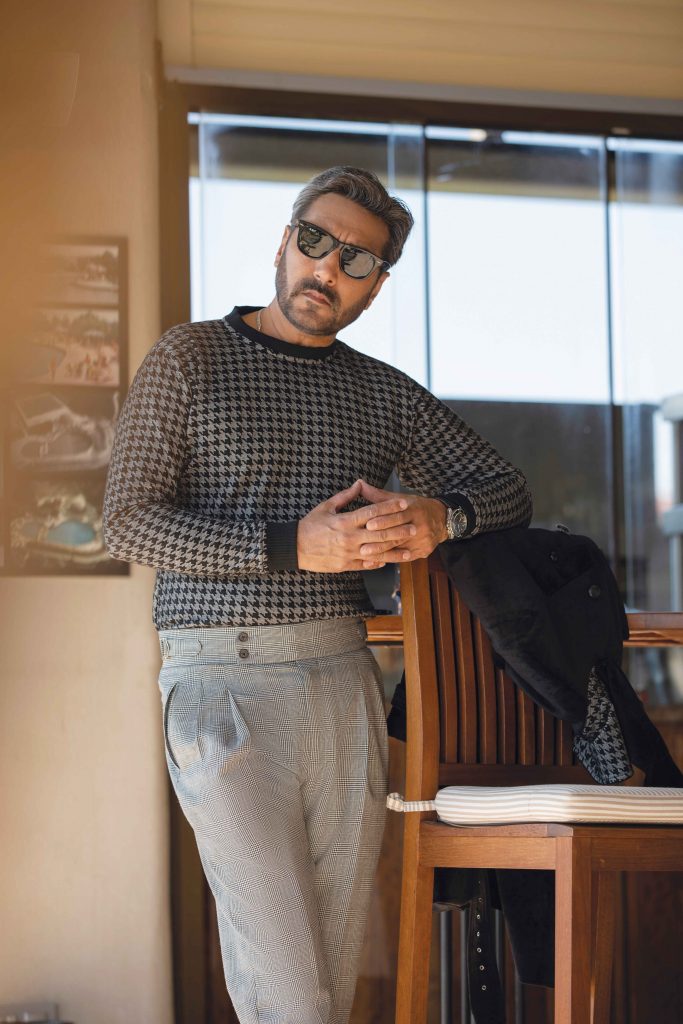 Humayun Saeed: a better actor or a better producer?
Both.

What has been the most satisfying project for you as an actor?
All of them. Have loved performing every role equally.

What haven’t you achieved yet that you would like to going forward?
Can’t think of anything as such. I am very content with everything that Allah has given me.