“I have teenagers now, and there are all the complications that come with it. I’m just hoping that nobody will ever be as difficult as I was.” 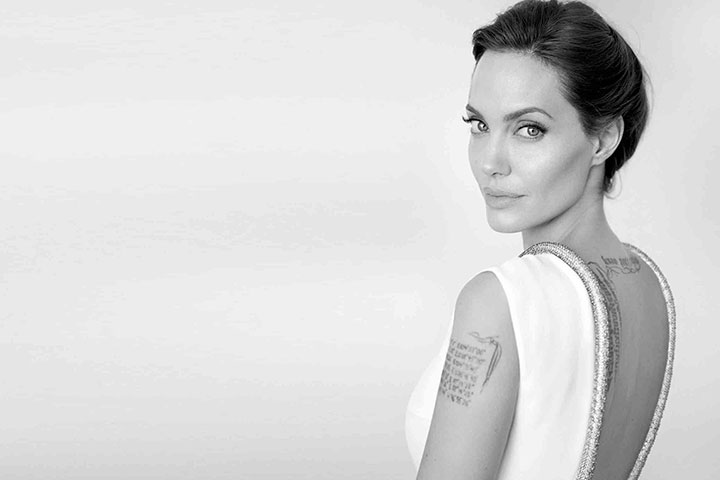 Angelina Jolie has rebounded from her difficult split from Brad Pitt with a mix of resilience and regret. Being a single mother of six children would be difficult under any circumstances and she doesn’t hide her discomfort in the wake of her filing for divorce from Pitt after 12 years of marriage.

“I don’t enjoy it. It’s not something I wanted. There’s nothing nice about it. It’s just hard,” Jolie, 42, said while promoting her latest film as a director, First They Killed My Father, a moving story about a Cambodian family’s struggle to escape the genocidal slaughter carried out during the Khmer Rouge’s notorious 1975-79 reign of terror.

The film is based on the personal memoir by Cambodian refugee Loung Ung, now 47, whose eponymous book looks back at her experience as a five-year-old girl whose family was forced to flee Phnom Penn when the Khmer Rouge invaded the city. Ung’s family was eventually captured and forced to live in a re-education camp while Pol Pot’s army was in the process of killing nearly two million Cambodians out of a population of seven million. 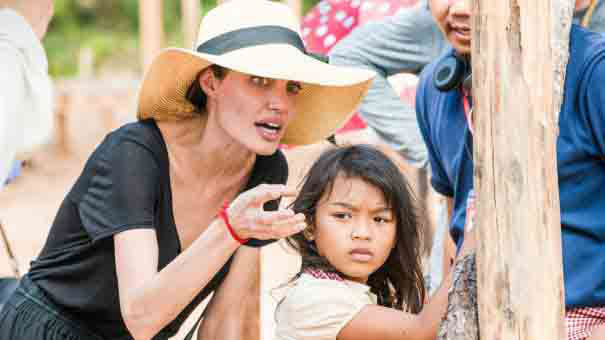 The film, directed by Jolie and whose screenplay was written by her and Ung, has a deep personal significance for Jolie. She was filming Tomb Raider in Cambodia in 2001 when she came across Ung’s book at a street market and was moved by the harrowing tale. She subsequently sought out the author, became fast friends with her, and sought her advice as to whether it would be appropriate for Jolie to adopt a Cambodian boy. That child turned out to be Maddox, the eldest of Jolie’s six children, who also worked on the film alongside his mother as did his younger brother, Pax. Jolie is particularly proud of how her children have grown ever closer together since their parents’ separation. “They have been amazing. It’s been so moving to see how much they have helped each other, stood together; the big brothers helping the little kids, and all of them helping me.”

“They have really come into their own during this time. They’re finding themselves and their voices…They’re just like (Loung and her siblings) in the film. I know that they will have each other for life. It gives me great peace to know the day I pass away that they will take care of each other.” 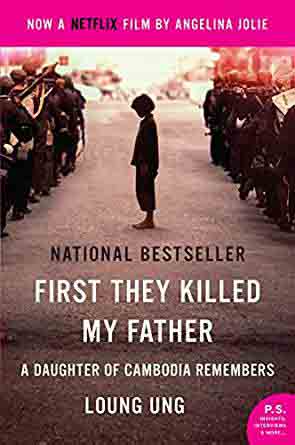 Angelina Jolie divides her time between homes in Los Angeles and her sprawling Chateau Miraval in southern France where she lives with her six children: Maddox, 16, Pax, 13, Zahara, 12, Shiloh, 11, and nine-year-old twins Knox and Vivienne. Said Jolie of her evolving experience as a mom: “Making sure our children have a sense of joy isn’t a small thing. We (Brad and I) want to make sure that they have a sense of purpose, of course. So, the challenges are when there are heavy things going on. I have teenagers now – and there are all the complications that come with it. I’m just hoping that nobody will ever be as difficult as I was. So far, they are not!” Here is what Jolie has to say about her new film and life post-Brad.

What was it like making this movie and having your two eldest sons Maddox and Pax work on it, too?
ANGELINA JOLIE: It was a joy because I want them to understand their world and be able to go out and live and make friends in the world. Yes, we were working on something important and I also want them to have a strong work ethic but I was so proud when I looked over and saw Mad and Pax working with the crew and creating something. It was a natural process and I think that it helped Mad to grow and evolve in a way that I couldn’t do (for him). His country had to teach him…Mad was very involved in the production and Pax worked as set photographer on the film. 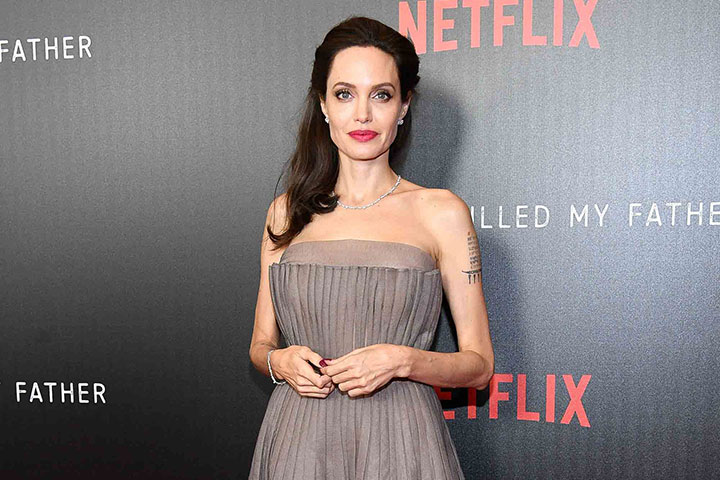 Cambodia has long had special meaning for you. Can you discuss that?
AJ: I first went to Cambodia about 16 years ago with Tomb Raider and that was the first film shot there after the war. I felt very ignorant because I knew nothing about the war and I went to the country thinking I would meet a very angry and broken people. But instead I was taken by how resilient and proud and beautiful the people and the country was. One day I went for a walk by myself and I went to a little bookshop on the side of the street and I bought a $2 book called First They Killed My Father. I sat and I read it and it changed my views and it taught me so much. A few months later I was working on the landmine (cause) and wanted to return to Cambodia.

How did you get to meet Loung Ung, the author of First They Killed My Father?
AJ: I asked to be put in touch with her and then when I met Loung that moment changed my life. The first night we were together, I think there was a monsoon at the time, I told her that I was considering adopting a Cambodian child and I asked her whether she would be offended or supportive and how she would feel…And thank God she was supportive and…she’s been in my life and my son’s life ever since. She’s taught me so much.

Your son Maddox is also listed as Executive Producer in the credits…?
AJ: He earned that credit! We had had the script already for a few years…and Mad has known of Loung’s story his whole life. I told him, “One day, son, you’ll be ready, and you will tell me when it’s time to go deeply into your country. But I need your help (on this film). You have to do it with me.” One day, he said, ‘I’m ready.’” And he was. I made him go really deeply into the research, daily work and the edit. Also because the film is from a child’s point of view, it was good to have somebody younger like Mad there to say, “You’re losing my attention.”

Mad was amazing, he actually really impressed me…I was able to say, you have a job, get over here, help me with this. I would say more notes, type it up – he was great! 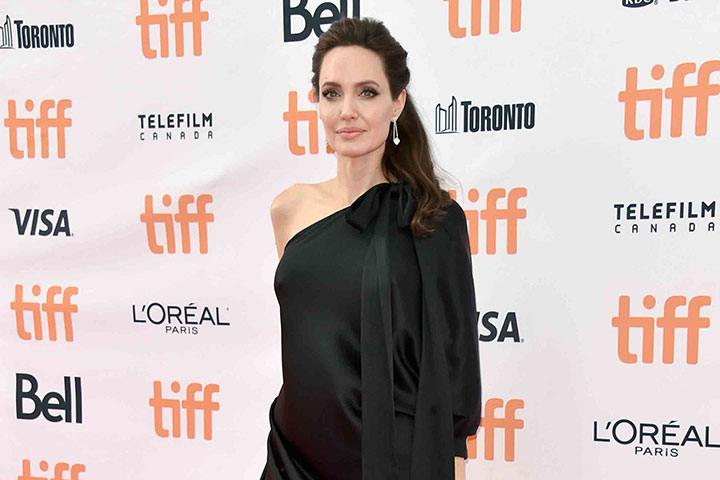 How difficult was the actual shooting process for the cast and crew who were Cambodian?
AJ: It was painful for everyone and you can imagine how difficult it was for them to relive certain moments, and seeing a recreation of Khmer Rouge soldiers marching brought up many traumatic memories. That’s why we made therapy available on the set for anyone who needed that. We were constantly talking about every scene and it was a way of bringing the crew together as a community and it was a very cathartic process.

What was it like for you as the director to witness the reactions of the Cambodian crew who were reliving this terrible chapter in their history?
AJ: I was so proud of everybody in Cambodia and how hard they worked and participated in the creation of the film. That was so moving for me to see and it was also important for them because one of the first steps the Khmer Rouge took was to kill all the artists and writers and anyone who could be creative and expressive. So seeing Cambodian artists contributing and working on this film was very special and beautiful.

How do your children feel about their experience working with you on this film?
AJ: Mad and Pax both loved it and the younger children also want to get involved.

“So I’m looking forward to the time when I might get to make a film where all the kids are working on the set with me. That would be incredible!”

My dream would be that if I continue in this business it would be to work with my children in the future on movie projects if they choose to be part of it. 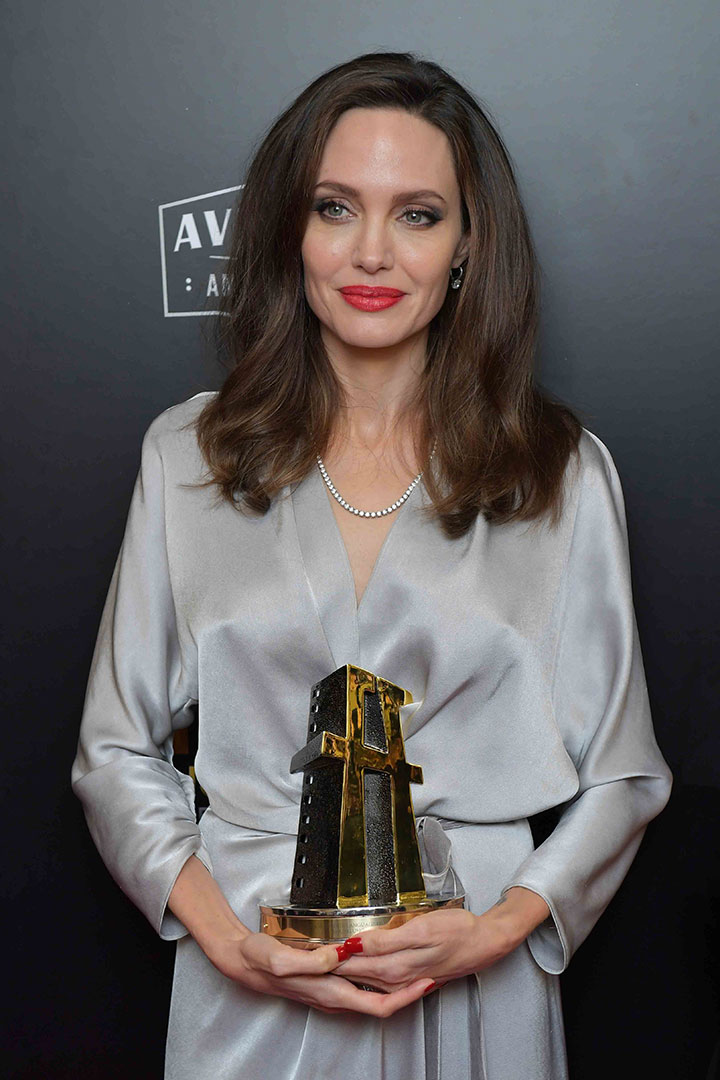 You and Loung Ung have been close friends for over 16 years. Did you always plan on making a film together?
AJ: No. I was very moved by the story when I first read it but the idea of making a film only came much later after Loung and I had already become like girlfriends. Then we decided to write the script together and that brought us even closer and it’s been such a wonderful process for us to see the film take shape and bring her story to the world.

Are your children also close to Loung?
AJ: They call her auntie. They love her, she’s like family. When we started writing (the screenplay) we both felt that it would be important for Maddox. He goes back to Cambodia often and he knows what it is to be Cambodian, but to work for several months (on the film) and to go this deep into the history, (that) was going to be another level of understanding and he had to be old enough to absorb it.

What do you hope audiences will take away from the story?
AJ: I love this country so much and

“I hope that when people see this film they don’t just see the war and the suffering but that they also get to really know this Cambodian family and a beautiful culture and language and great and talented artists.”

I hope that people will come and bring work and travel to Cambodia.