Jessica Chastain is one of the finest actresses in the business. She projects intelligence, determination, and sensitivity in every role she plays. Recently, she has earned rave reviews for her stunning performance in the remake of Ingmar Bergman’s Scenes From a Marriage, which was released as a five-part limited series on HBO. In addition, her portrayal of the late American Televangelist Tammy Faye Bakker in The Eyes Of Tammy Faye earned her this year’s Oscar for Best Actress.
Now Chastain appears in a very different kind of role as a CIA operative in The 355, a female-driven spy thriller. Directed by Simon Kinberg, the film co-stars Penelope Cruz, Lupito Nyong’o, Diane Kruger, and Fan Bingbing. Chastain developed the project herself and does double duty as both star and producer.
“I was on the jury at Cannes and I was having a conversation with my agent about how I was seeing all these films with male action ensembles,” Chastain recalls. “But I had never seen a female action ensemble film that took itself seriously where it didn’t make it appear that it was silly that women could be good at that kind of a job.
“But my experience on making Zero Dark Thirty allowed me to discover how many women work in espionage and how they’re often deployed in the field. Then I came up with a wish-list of who I thought were the best actresses working today and it took off!”
It all makes for a rollicking adventure ride that Chastain hopes will be yet another film that shows how women can be just as capable as men even in territory commonly associated with James Bond, George Smiley, and Jack Ryan. 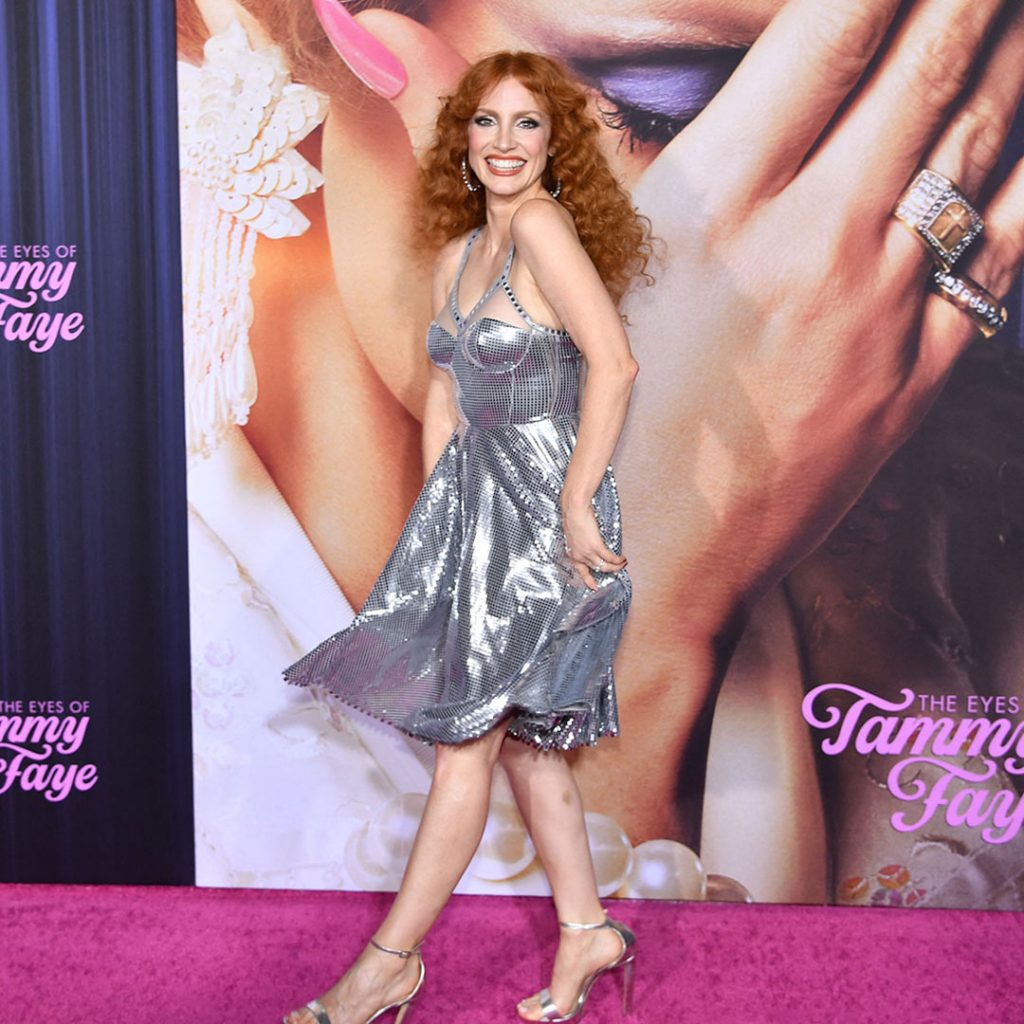 The 44-year-old Jessica Chastain lives in a sprawling Victorian apartment overlooking Central Park in New York City together with her Italian nobleman husband, Count Gian Luca Passi de Preposulo 41, a fashion executive at Moncler. They have spent the past eight years together, and were married in June of 2017 in an exclusive ceremony held in Treviso, Italy. In 2018 they became parents of a baby girl, Giullietta Passi Chastain, born via a surrogate, and last year reportedly added a second child to their family, name undisclosed.

What made you want to play Tammy Faye?
JESSICA CHASTAIN: She was a very fascinating woman. She created three television networks, broadcasting networks. She hosted a ton of television every single day. She wrote books, she recorded songs, she was constantly working…And I also think she wasn’t properly recognised for those accomplishments because she lived very lavishly, and of course her husband went to jail for fraud.
But people forget that she herself was never charged…And I also think that as a woman she was unfairly judged because she wasn’t shy about spending her money. I get uncomfortable sometimes when we talk about women being paid for their business accomplishments as greedy, you know? Because the empire that she had created was very lucrative. 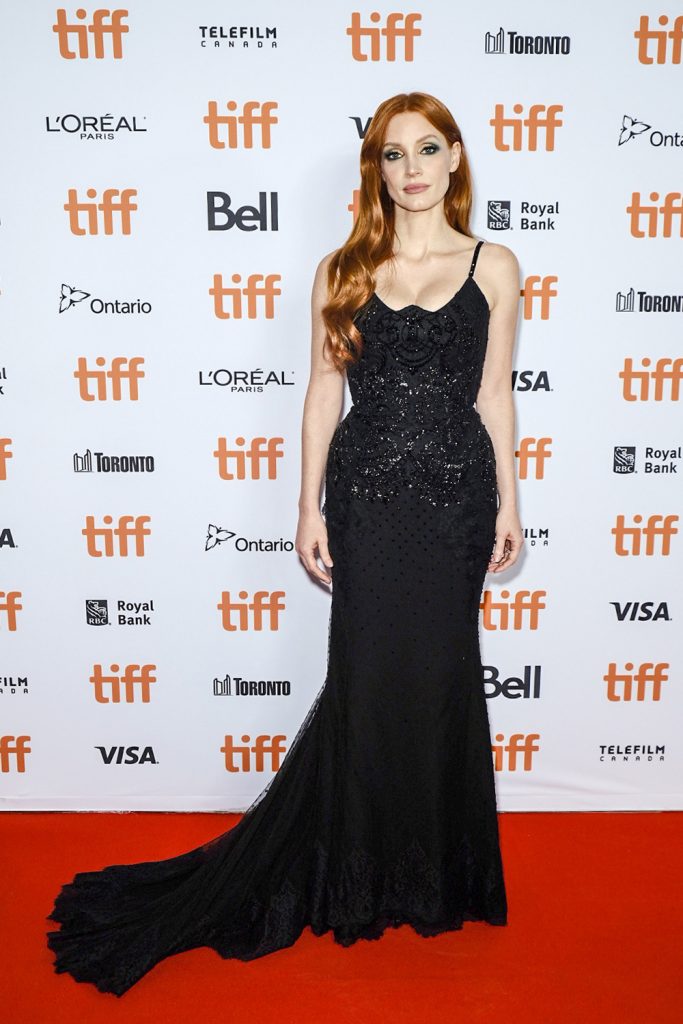 What stood out to you the most about Tammy Faye?
JC: I really admire her for how she was so unafraid about talking about AIDS at a time when the U.S. government was trying to bury the issue and wouldn’t even admit there was a crisis. The president [Ronald Reagan] wasn’t even saying the word AIDS. But Tammy Faye believed that it was the duty of Christians not to make moral judgements and to embrace the people who were dying and suffering from the disease. She saved a lot of lives by alerting the public to AIDS when the government wasn’t taking it seriously.
She was very open about addressing the issue and being true to her own view of what it meant to be a Christian by saying that Jesus loves everyone and that we have to follow that message. That’s what I believe that Christianity is all about and what really impressed me about her… She would say, “I love you.”  She loved everyone and she believed that everyone was deserving of God’s love and grace…and that was her message.

Is this one of the more difficult or extreme roles you’ve ever taken on?
JC: For sure. It’s the hardest. Also, singing. The day I went to do it, I tweeted something like: “I am living off of bourbon and Throat Coat.” Because I was so scared. I actually drank Throat Coat tea with whiskey while I was singing. I’m not hardcore like that! But I was like, there’s no way that I can be this nervous, and that was my “get-ya-through-it” recipe.

Tammy Faye was notorious for her heavy makeup. Do you think that was in some sense a way of hiding herself?
JC: No, just the opposite…Her voice was so big, her bumblebee outfit that you saw her wearing all the time was so fabulous and so crazy. Her songs are all out there. She’s doing kooky things all the time. So why would she be demure in her makeup? She had the fearlessness of a drag queen. She wanted to express herself … It was her being like, “Look at me!” 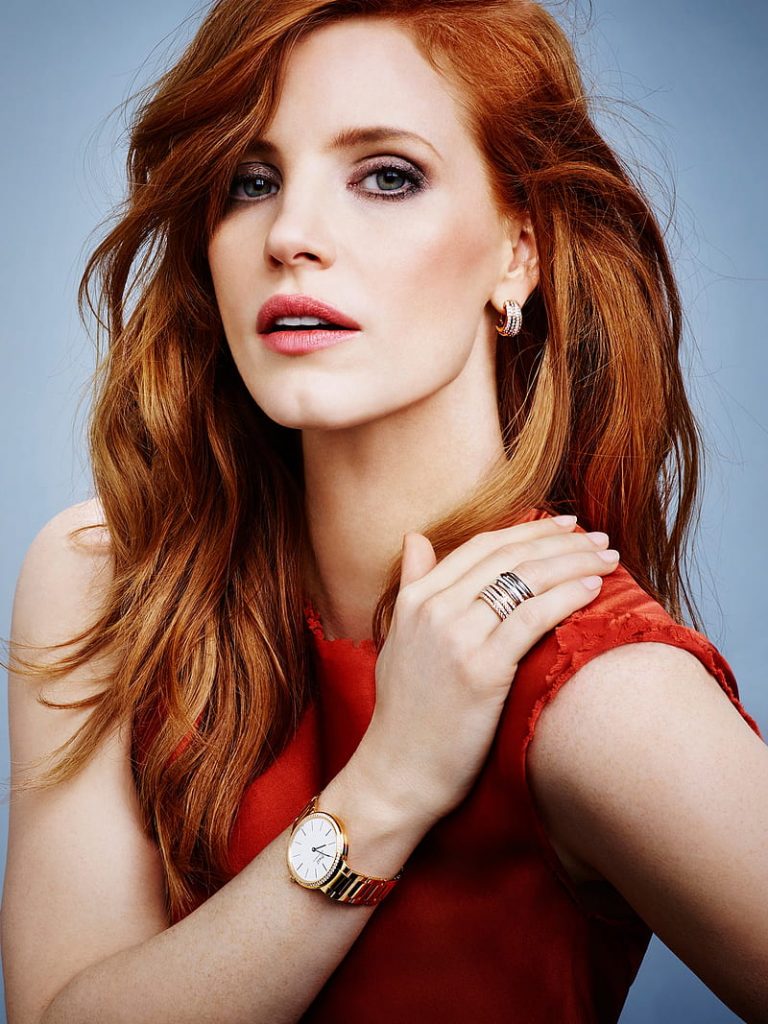 Tell us about your character, Mace.
JC: She’s an exceptionally gifted and intelligent CIA agent who can often go off the books and follow her own code and sense of what is right. She’s someone in constant search of justice and that’s what sets in motion the mission she’s taken on, and where she goes out and brings on board the best female agents in the business to work alongside her.

You previously played a CIA agent in Zero Dark Thirty. Did your work in that film give you an idea for this kind of a female-driven action movie?
JC: Yes. While preparing for that film I did a lot of research on the intelligence community and I realised how important women are in espionage because they’re often on the front line working as field agents. And despite all this women are often underestimated in that community, even though they’re highly adept at undercover ops, developing contacts, and obtaining top secret information that is the essence of most espionage work.

You’ve often spoken out about the need for films to present women in a way that demonstrates their strength and capabilities. Is The 355 part of that process?
JC: Action films are very important to Hollywood because they often generate a lot of profits and they attract a lot of attention to the actors who work in those projects. If our film is successful, it’s obviously going to pave the way for similar kinds of female ensemble films. Right from the very start of trying to get the film financed, I was thinking about how great it would be to make a film with female espionage agents who are incredibly capable, smart, and efficient at their jobs. I think it will help inspire a lot of young women…
My goals and dreams for The 355 is that we just accept the fact that women are awesome and tough and badass. I’m excited for society to start acknowledging what’s happening in our world.

You’re very conscious of women’s roles in society.  In your limited series Scenes From a Marriage, you play a woman who earns more than her husband, which creates some issues in their marriage.  How do you reckon with that?
JC: Earning more than your husband and having more power than him – that shouldn’t be something that surprises us or seems unusual…I have many female friends who earn more than their male partners. Society is evolving in a direction where we women are being recognized for our intellectual capabilities.
This also changes the traditional corporate landscape because women are being treated more as equals who are entitled to earn the same kinds of salaries and enjoy the same kind of power as men in society. Not that there still isn’t a long way to go.

Women are still faced with the issue of work vs family life and their role as mothers?
JC: We’re still dealing with the sense of guilt and the trap of feeling too masculine when we are successful or the guilt and anxiety that comes from when we are too dependent on our male partners when we are looking after children and staying home more. I hope that more and more women will be able to do both, have a successful career and also look after their children. And without feeling the guilt of feeling inadequate from trying to accomplish both.

You’re married to a successful Italian businessman, Gian Luca Passi de Preposulo, who comes from an aristocratic background. How do you feel you have found your own balance in your marriage?
JC: I’m very lucky because my husband always wants to celebrate my successes and is proud of my work, and I feel the same way about his accomplishments. This is how it should be: relationships in which the partner encourages you to take your place in the world, and celebrates you for who you are.
The above comments by Jessica Chastain were made while she was promoting her new HBO limited series, Scenes From a Marriage, at the Venice Film Festival. With additional comments she made on the occasion of the world premiere of The Eyes of Tammy Faye at the Toronto International Film Festival and from a Dec. 5th Zoom chat for her new film, The 355. Her comments have been condensed and edited for length and clarity.