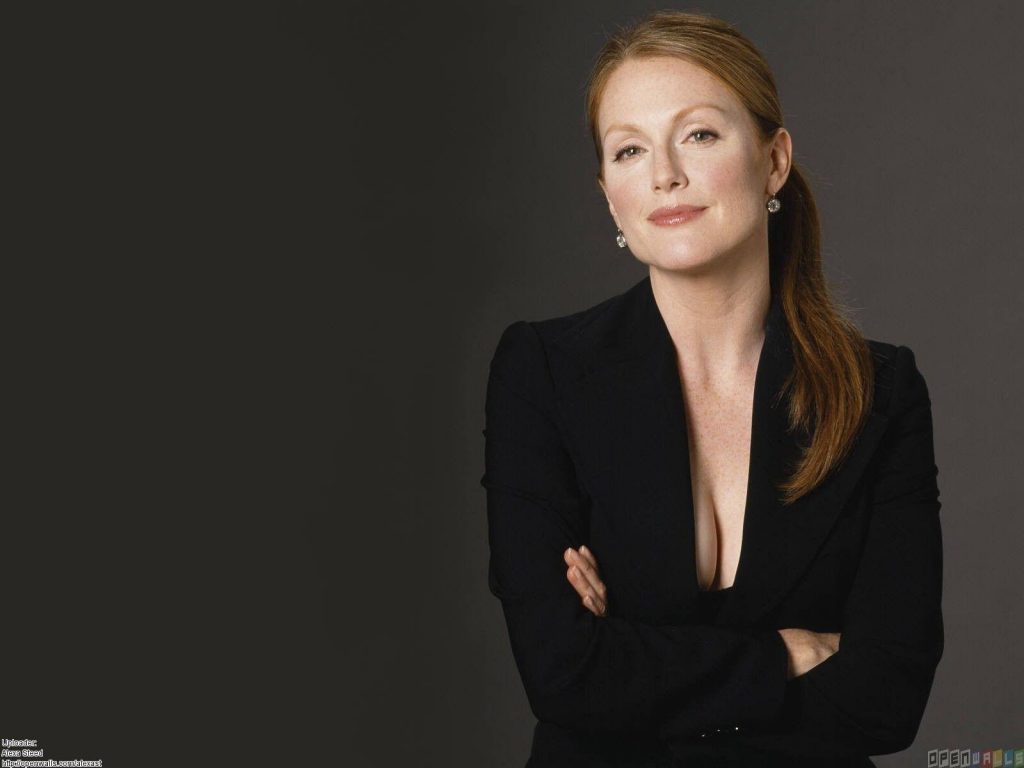 Julianne Moore is a remarkable woman from every perspective.  Long recognised as one of Hollywood’s most gifted actresses, winning the Oscar for Still Alice [2015] was merely long overdue official confirmation of her extraordinary talent. A part from a fabulous film biography that reads like a rock star’s greatest hits – Far From Heaven, Boogie Nights, The Big Lebowski, Magnolia, The Hours, A Single Man, The Kids are All Right – Moore’s career is all the more remarkable in that her best work has come after turning 40.
Today, at age 60, Moore is still as vibrant and active as ever.  She recently played feminist pioneer Gloria Steinem in The Glorias, and can now be seen in the highly anticipated eight-part limited series, Lisey’s Story, via Apple TV+.  The series is based on the eponymous novel by Stephen King who was so enamoured of the project that he decided to write the scripts for each episode. Moore plays Lisey Landon who is increasingly beset by memories of her husband, novelist Scott Landon (Clive Owen), who died two years earlier.  The series is directed by Pablo Larrain (Jackie) and co-stars Joan Allen, Jennifer Jason Leigh, and Dane DeHaan.
“I was attracted to it because of Stephen, and also because it was something that was so personal to him,” Moore said. “One of the things that’s amazing about Stephen and his writing is that he’s able to explore human relationships but in a fantastical way. This story investigates the idea of an adult, mature relationship and a long-term one — a marriage — and what it meant to them personally, the secrets that they shared.”
Moore also wants Stephen King’s fans to know that King’s adaptation of his novel delivers all the mind-twisting, genre-bending leaps at the heart of the novel.
“It’s all in there. There’s so much in it — psychological horror, romance, mystery, a science-fiction-like quality, sort of scary brutality — sometimes I was like, holy cow, what now?”For his part, King was anxious to throw himself into the project: “Lisey’s Story means a lot to me because it’s the one I love best,” King said. “It’s a story about love and marriage and the creative impulse and also has a kick-ass villain in it. My idea was to be all the way in as much as possible…This is a passion project.”
Moore and her director husband Bart Freundlich make their home in Manhattan’s West Village area of New York City together with their two dogs, Cherry and Milly.  They have two children, now both attending university: son Cal, 23, and daughter Liv, 18.  In addition to Lisey’s Story, Moore will also soon be seen in Jesse Eisenberg’s directorial debut, a comedy/drama entitled When You Finish Saving the World. 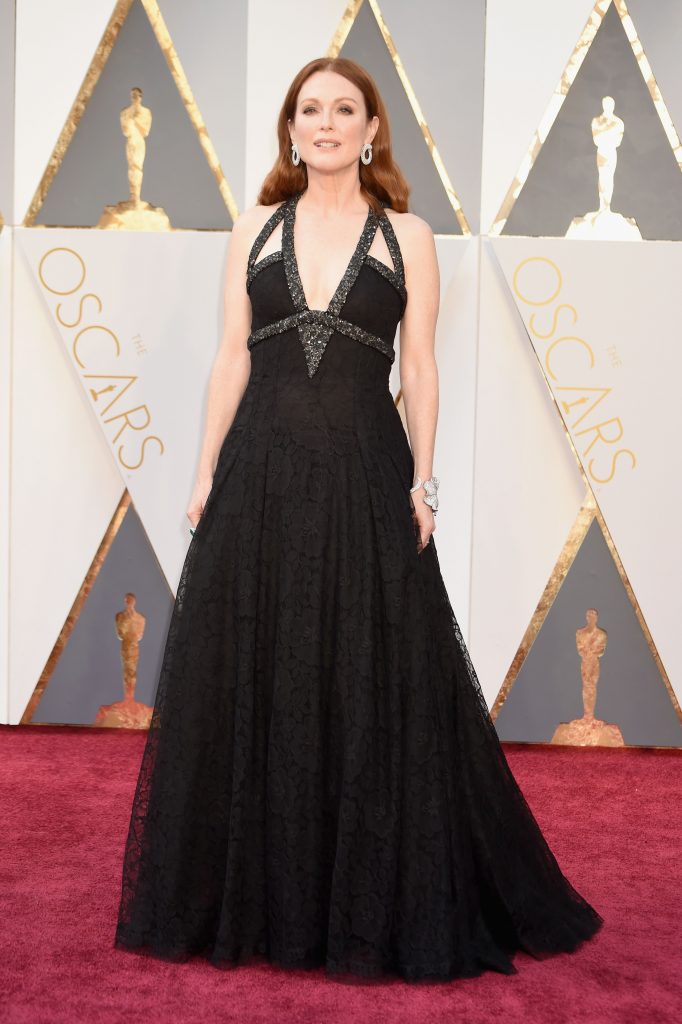 Was it exciting for you to be a part of a Stephen King story?
JULIANNE MOORE:  Stephen was gorgeous, incredibly generous, and he’s thrilled with this project which he also wrote the script for.  It’s the story of a marriage that had been dragging on for some time and there are some extraordinary adventures in time which take place.

What was your time like making a very tense, gripping kind of series like this?
JM:  The whole experience was a real gift…I loved working with Pablo Larrain, Clive Owen, and the rest of the cast.  I really enjoyed the story and its wonderful mix of reality, relationships, and fantasy.  It delves into one’s deepest fears and desires.

What do you think audiences will take away from the series?
JM: It’s that marriage is worthwhile. It’s interesting, because in so much of entertainment, you need conflict right from the get-go to make it entertaining.
They don’t always explore that from the time you get married to the end of it, so I think that it’s unusual in that this is an exploration of that kind of intimacy, and intimacy without an imposed conflict…I think there’s a reason that people couple up and want to have a partner and go through life together. And I think this is an exploration of the value of that. 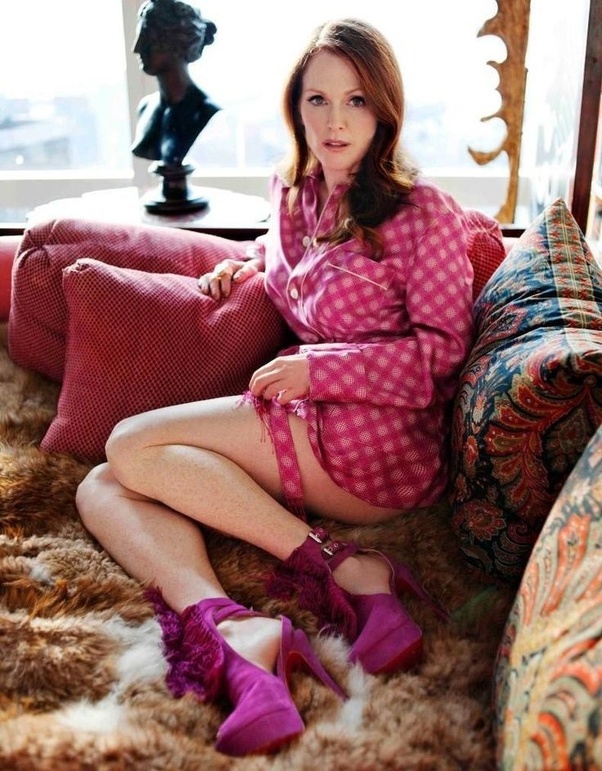 Living under the pandemic has posed many different kinds of challenges.  How has it affected you personally?
JM: It made me very conscious of the passage of time and the awareness that, inevitably, everything ends.  So this creates a sense of urgency inside you to make the best possible use of your time.  You ask yourself: “Am I really doing what I wanted to do?”  The pandemic has confronted us all with these kinds of questions.

What about the impact on your children?
JM: It was also difficult for our children.  Caleb was about to start the first year of his Master’s programme and Liv was entering first year university.  Caleb had been looking forward to his university graduation earlier in the year and Liv had been hoping to attend her prom and all of those very meaningful events were cancelled.
We talked about it as a family and we have tried – like everyone else – to live as normal a life as possible. This pandemic has forced us to open our eyes.  It’s a global phenomenon that has affected all of humanity and has forced us to reflect on how interdependent we are, and that problems such as public health and climate have no borders of any kind.

You recently appeared as Gloria Steinem in the film The Glorias.  What are your lasting impressions of Steinem and what she means to the women’s movement?
JM:  She is a fascinating, incredible, wonderful person: a true leader. The message of compassion and tolerance that she has been promoting for years is even more relevant today.  Gloria is a model for how to live a full and vibrant life. 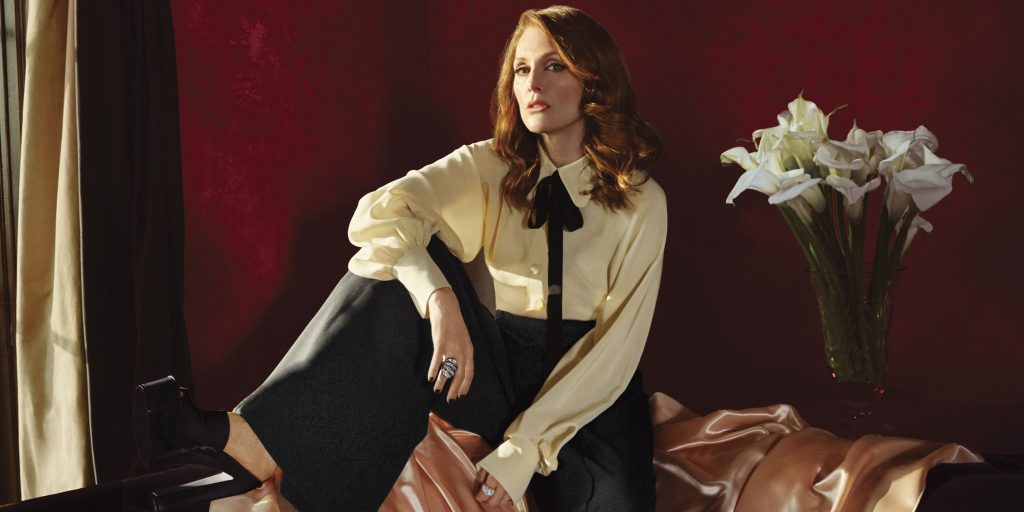 Did the themes regarding women’s rights and the birth of feminism make you reflect more deeply on the challenges women have faced and continue to face?
JM: Working in the project made me revisit my past. I thought of my mother, of the world in which she had grown up, when women did not have the advantages that we have today. The birth control pill, for example, not being able to have a credit card in your name without your husband’s signature, the chance to get a good school education and go to college.
My parents paid for my studies, but that wasn’t the case with my grandparents in regards to my mother.  In those days they didn’t believe it was important for a girl to have a university education. These are all things that I only understood after I began researching and discovering all the hard work that Gloria and the feminists of that time devoted to the fight for gaining equality for women.

You mentioned how Steinem was an example of a woman who led a very full life. How do you think you’ve succeeded in combining a good family life, a long-term marriage while still pursuing an incredibly successful career?
JM: I always had a good structure that made it easier to deal with a lot of the problems and worries we all experience. I think that allowed me not to feel overwhelmed by everything that goes on around me.  It makes life much simpler and more enjoyable when you’re not letting yourself get dragged down by a lot of things which you can’t control.

You and your husband Bart Freundlich have also been able to work together, most recently on After the Wedding. Do you feel that knowing your husband so well gives you a different perspective when you’re acting in a film he’s directing?JM: When you’re on the set and you’re with your husband, you know when he’s tense. I’d walk up and be like, ‘What’s the matter, what happened?’ Whereas another actor may not register that.
The real pleasure though is in being able to share the experience of making a movie together and enjoying that creative spirit and the joy we both get from doing what we love.  It was also so interesting and so much fun for us to have been able to discuss our ideas while working together. 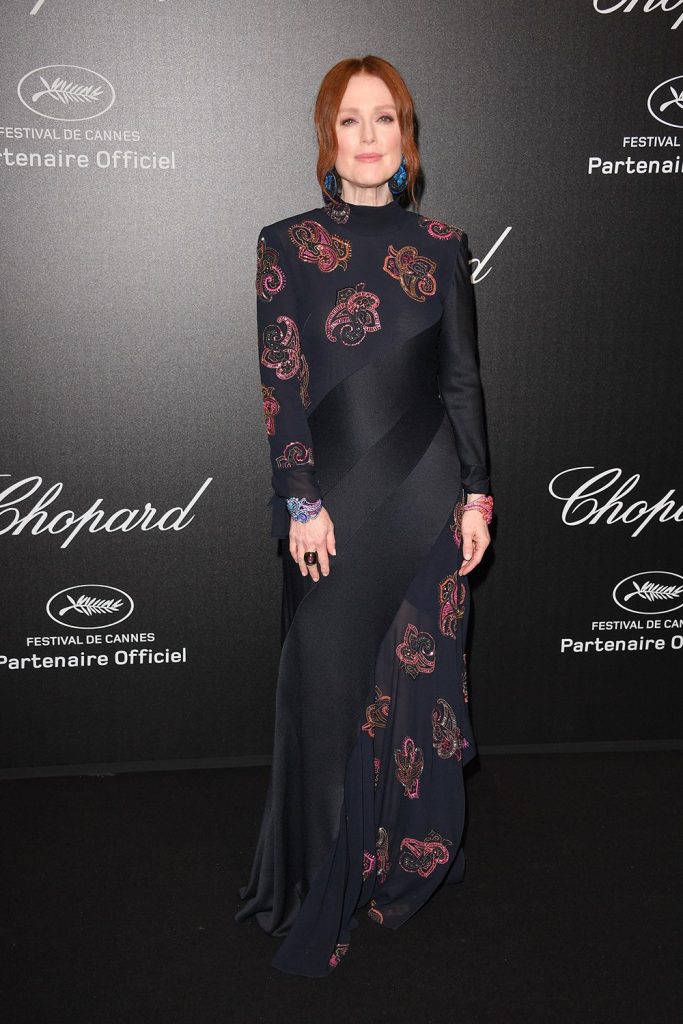 As a child and teenager, you were constantly moving from one city to another as a child because of your father’s position as a military judge.  Was there something about that experience that has informed your work as an actor?
JM: Having to travel a lot and constantly adapt to many different schools and environments when I was growing up trained me to be very observant and reflective about people. You become a student of human psychology where you learn to recognise and analyse all the masks that people put up in different situations and how human behaviour is so complex and variable.
Whenever I would go to a new school,  I would often spend a lot of time alone and I would just watch how the other students behaved.  I became acutely aware of how guys and girls would interact with each other in different ways that would vary from school to school and from one city to another.

Were you obliged to work hard each time to fit in with each new school environment?
JM:  Yes.  I would try to figure out how to adapt to each new social environment and act in a way where I wouldn’t feel like an outsider.  You need to find a way of fitting in and sometimes that could be very hard – it’s hard for a lot of teenagers to fit just under normal circumstances, much less switching schools every year.

Speaking of adjustments and adaptation, what kind of an adjustment has it been for you to see your children leave home while they pursue their university studies?
JM:  It’s not easy but you have to be ready for it because you’ve been trying to prepare your children to lead full, independent lives.  We’re both very proud of our children and Cal is a very bright, wonderful young man and our daughter is growing up so fast.  As a mother, you just have to let yourself get used to the idea of seeing them go off on their own and knowing that you’ve done your best to help them.
When your children leave the house it completely changes the family dynamics. It happens to everyone, though, right?  And of course you experience all those inevitable moments of nostalgia for when they were little. But at the same time a new chapter opens up in your life. Bart and I are now figuring out all these different challenges and emotions.

You’ve often spoken very highly about your husband Bart and your marriage to him?
JM:  He’s incredibly sensitive, thoughtful, and sharp. He’s also very attentive to people, to the feelings of others, always present in his relationship with you. We share many things!  The above comments by Julianne Moore were made via Zoom chat on Friday, February 19th while she was promoting her new series, Lisey’s Story, at the CTAM Winter 2021 Press Tour virtual presentation.  With additional comments from a Sept. 21st Zoom chat while promoting her recent film, The Glorias.  Her comments have been condensed and edited for length and clarity.