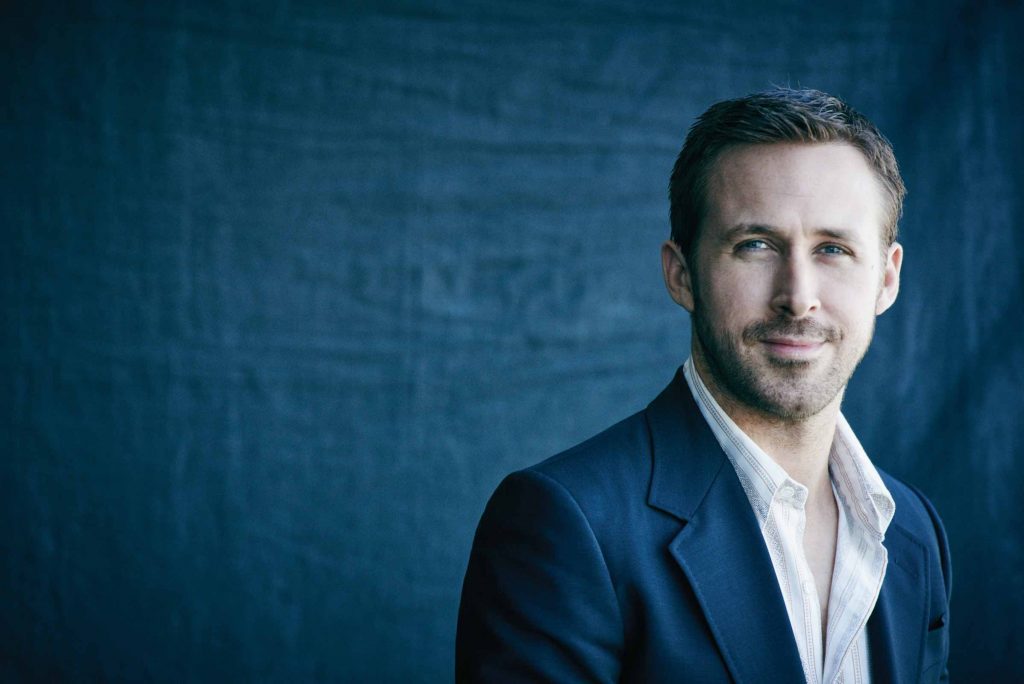 Ryan Gosling has immense appeal to women. Perhaps that’s because he has no problem revealing his masculine and feminine sides, having been raised by a single mother in his native town of Cornwall, Ontario. He also spent considerable time absorbing life lessons in the company of his older sister, Mandi.
That may well account for his easy-going manner with women and the kind of sensitivity he brings to his screen romances. Apart from his Oscar-nominated performance in Half Nelson, Gosling’s work in The Notebook, Blue Valentine, and La La Land have revealed his abiding passion, curiosity, and appreciation for the opposite sex. 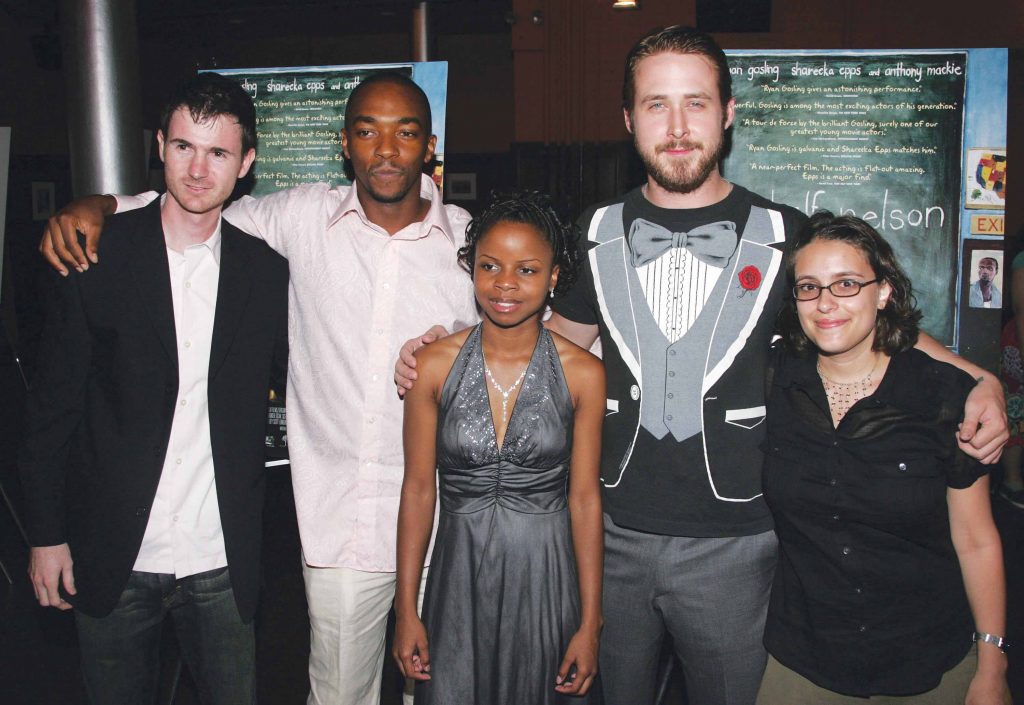 ON BEING RAISED BY WOMEN
“I grew up with two incredible women, my mother and sister, and naturally my way of looking at the world was shaped by a female perspective,” Gosling says. “I’m sure it made me very protective and caring with women and I’ve always enjoyed their company and that kind of emotional openness. That’s also the kind of fundamental quality you need to bring to your work as an actor.”
“There’s this Jungian idea that each of us has a soul with a feminine and masculine sensibility, and I think I have the right balance. However, I’m not the only man in the house – there’s also George, our dog,” laughs Gosling. “But I’m very happy with the way things are.  Our two little girls Esmeralda and Amada are angels, and Eva is an extraordinary mother. And at home there is total chaos, and I like it!”  [Laughs]
Ryan was only 13 when his mother moved him to L.A. where he became a child star on the Mickey Mouse Club, an American kids’ TV programme that also launched the careers of Britney Spears, Christina Aguilera, and Justin Timberlake.
“I wasn’t raised in a conventional way,” Gosling explains. “I grew up being surrounded by women and didn’t develop the usual kinds of macho bullshit attitudes towards life and towards women. I spent a lot of time as a child entertainer singing at wedding parties.”
“I never hung out with the cool kids or the tough kids at school and after I started working on TV some of the kids at my school would bully me and tease me every day. I would have to take ballet classes to learn dance moves for my work on the Mickey Mouse Club show and obviously stuff like that was going to make me a target at school.”
“That’s when my mother decided to take me out of school and have me home-schooled instead. My sister became my best friend and there was never that typical brother-sister friction that sometimes goes on in families.  She was always very supportive of me and gave me a lot of good advice as I was growing up just like my mother did.”
“I also loved being able to grow up in an unstructured environment as compared to going to school every day.  It might not be good for everyone, but I certainly loved it.  I’d wanted to be an actor since I was 8 years old and growing up the way I did is probably the best training you can ever get…I’m very grateful for the education I received.”
Gosling was famously fired from the series for supposedly “corrupting” the other Mousketeers, and that kind of hellraiser attitude towards life has stayed with him ever since and clearly informs much of his work as an actor.

GROWING UP WITH A DIFFERENT PERSPECTIVE ON THE WORLD
“I grew up in a way where I always felt, almost by definition, that I was an outsider because my world was that of a TV or movie set. I was always looking at life in a different way than other kids my age and probably I grew up with a twisted sense of what was going on in life. I like being able to think that I approach things with a heavy degree of scepticism and cynicism – it’s not like politicians are telling us the truth.” 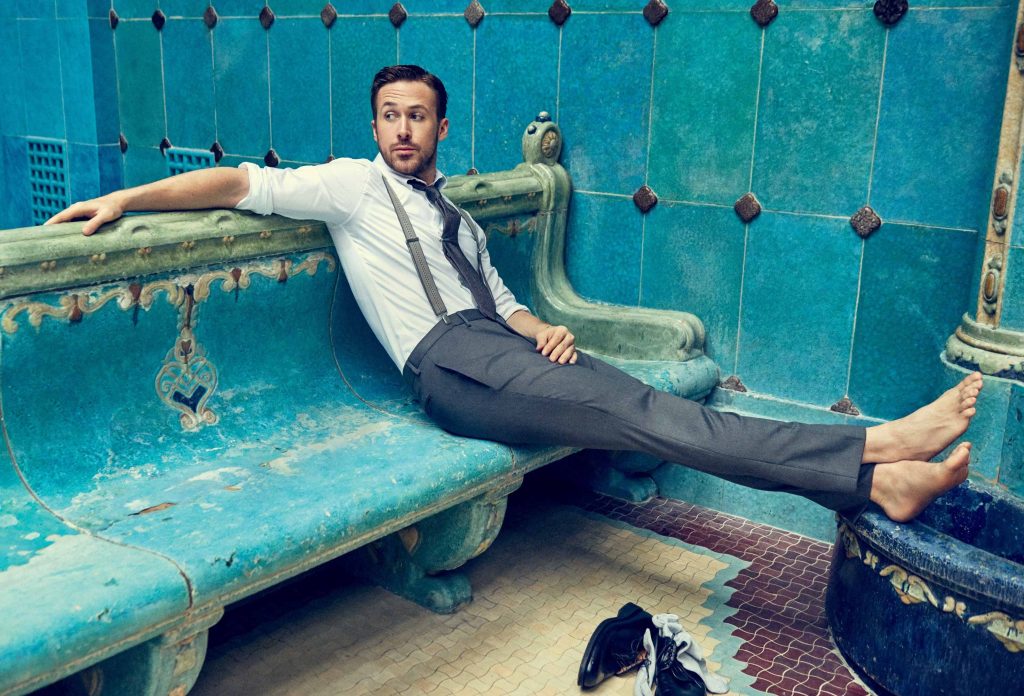 ON BEING ENTHRALLED BY HIS UNCLE, AN ELVIS IMPERSONATOR
Acting held enormous appeal for him, having grown up watching his uncle, an Elvis impersonator, perform at various clubs in Ontario where, as a young boy, Ryan was jokingly appointed as “head of security.” That was his gateway into another world that fed his youthful imagination.
“I was just having fun. My uncle was a big influence, though. He was living with my family at the time for about a year and he had begun performing as an Elvis impersonator.”
“Prior to that, the house was pretty ordinary. My father was working in a factory and my mom stayed at home.  Suddenly you’re living with Elvis and your whole family gets involved. So one person is singing back-up vocals, another works as a bodyguard, and you feel like you’re part of this strange new world.”
“After my uncle left, though, life was pretty boring, and I wanted to find a way back into that world. So I did everything I could to get there. I took singing lessons, dancing lessons, and then auditioned for the Mickey Mouse Club and that was the start of it, really. Even though (the Disney people) thought I was a bad influence, I still had a great time there.”

ON BECOMING A WORKING ACTOR AT THE AGE OF 12
“I was very serious when it came to acting and earning a living. My mother and sister became dependent on me after my parents got divorced but my mom was supporting me in my career and I could never have achieved anything without her and my sister there for me. So I may have supported them financially, but I didn’t look at it as if I was doing anything other than what I should be doing.” 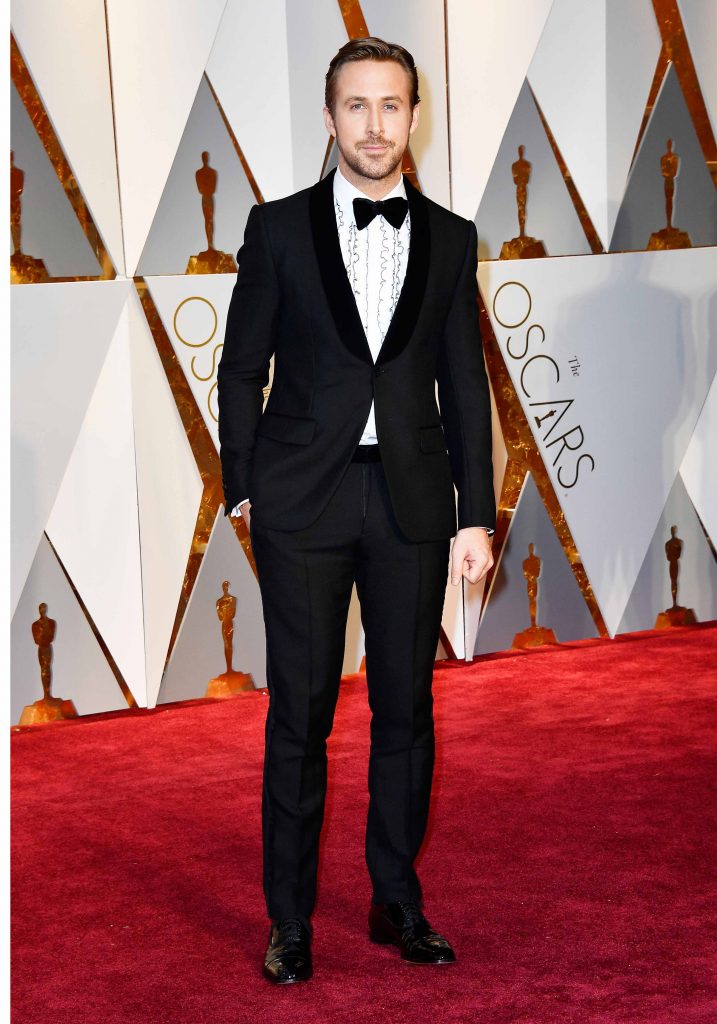 ON THE IMPORTANT INFLUENCE OF HIS MOTHER
He credits his mother for being a strong role model in terms of her independent-minded spirit.
“My mother is a strong woman who has been a huge influence in my life…When, for example, I began to have difficulties at school, and it was obvious that that was not working out for me, she immediately decided to withdraw me from school and home school me instead.. Some people close to her criticised her and felt that her decision would create big problems for me later in life.  But it turned out to be the most beautiful and positive thing that could have happened to me. I learned how to study and think for myself and also learn a lot about what kind of person I wanted to be and the kind of things I wanted in life.”
“My mom is very beautiful and was a single mom,” Gosling recalls. “When you’re a kid and you have a single mom, all men feel like wolves. Guys would whistle at her — it was very predatory and threatening. As a kid I felt helpless, so you start to imagine all these scenarios where you can do something. You see the world through the filter of your imagination.”

ON HIS ATTITUDE TOWARD STARDOM
“I saw acting as a way of making very good money compared to how my parents had struggled when my dad was working at a paper mill and my mother was a secretary. So I was happy to be helping my mother and sister…Also, I’m not stupid. Acting is a pretty good gig!”
“The whole notion of being a movie star is part of the myth-making process that goes on in the film business. You create this great illusion on screen and then the illusion is taken to a different level when actors become mythologised. “
“I don’t even think of myself as particularly good looking and not at all a typical kind of Hollywood leading man sort of actor,” cautions Gosling. “I think I have a greater affinity for characters who aren’t mainstream leading man kinds of roles, although I enjoy playing basically any character as long as the film has something interesting to say about life.”
“I hate feeling that I’m just doing a job for a paycheck. I like to think I’m being creative and doing something meaningful as an actor and as an individual.”

ON BEING A FATHER AND HUSBAND
Now Gosling’s principal affections are for his girlfriend of the past seven years, actress Eva Mendes, with whom he has two daughters, Esmeralda, five, and four-year-old Amada Lee.
Gosling and Mendes rarely make public appearances together and instead have largely shielded themselves from the limelight while raising their children.
“It’s an exciting time. It’s really nice to be a father…I’d thought a long time about starting a family…I’m a romantic and I’m lucky to have the right woman at my side…It’s like being in paradise. I’m so lucky. The birth of our children has radically changed my life which every day becomes more beautiful as I never imagined. Every day getting to spend time with them is so exciting. I love watching them grow up. I never really thought that being a father would be such a wonderful thing.”

ON MEETING EVA MENDES
“It’s been the great good luck of my life to have met her. Everything changed with her. Especially now that we have two girls. The older they get, the more I want to stay home with them instead of working.”

ON NAMING HIS DAUGHTERS ESMERALDA AND AMADA
“It’s not a coincidence that she’s named after the heroine of Victor Hugo’s novel, The Hunchback of Notre-Dame. Eva and I are in love with that novel. And it’s a beautiful name…”
“And Amada was the name of Eva’s grandmother: It means ‘loved’ and that’s exactly what we felt when we first saw her.”

ON HOW HE ENTERTAINS HIS DAUGHTERS
“I play, I hum, I tell them stories.”

ON WHETHER HIS KIDS KNOW DADDY’S AN ACTOR
“I was shooting First Man and I was dressed up in the space suit and pretending to launch and my kids thought I’m an astronaut. My oldest once pointed to the moon and said, “That’s where you work?” [Smiles] 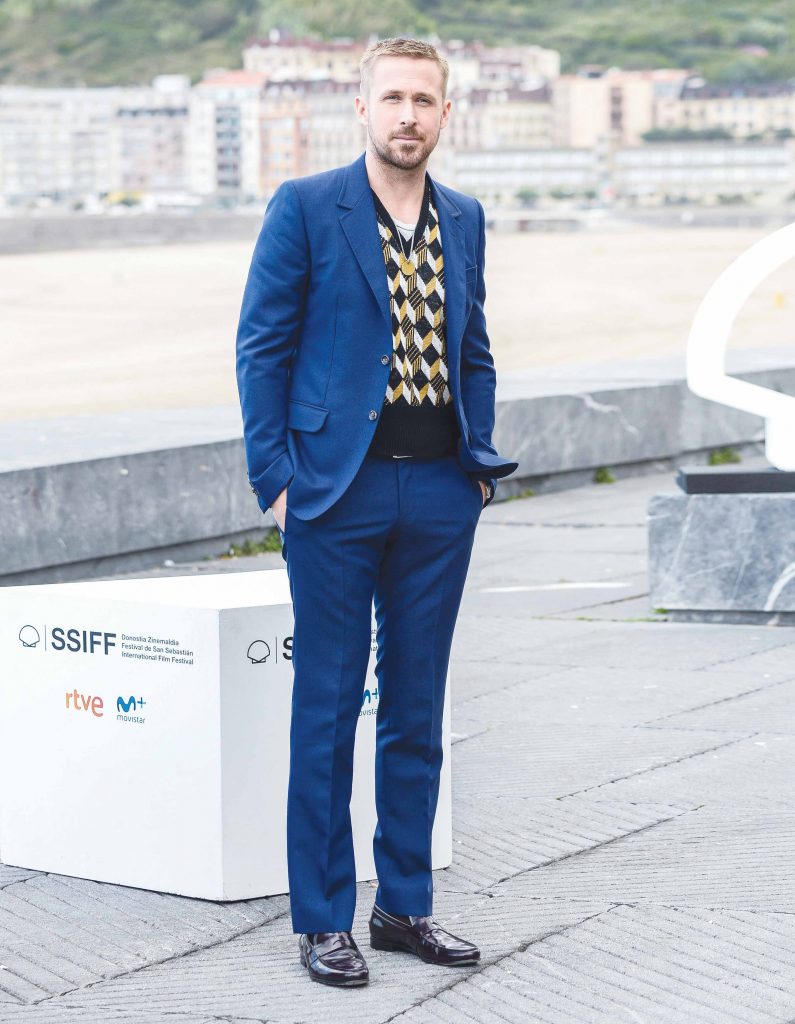 ON ONE OF THE BEST THINGS SUCCESS HAS BROUGHT HIM
“Being able to buy a house for my mother. I paid for it in cash! We were forced to move around a lot and live in many different apartments while my mother was raising my sister and me. Nothing really compares to the kind of joy I had when I was able to make that gift to my mother.”

ON HIS CANADIAN IDENTITY
Gosling attributes his natural reticence and resistance to the trappings of fame to his Canadian identity.
“Canadians are a little quieter and more circumspect. I enjoyed growing up there, but I wouldn’t want to live there again because it’s too cold. I still shake my head when I remember the day, I was walking to school early in the morning and it was probably minus 20 outside and I saw a dead cat on the street. It was frozen solid, and I just picked it up and swung it like a bat against a tree.”