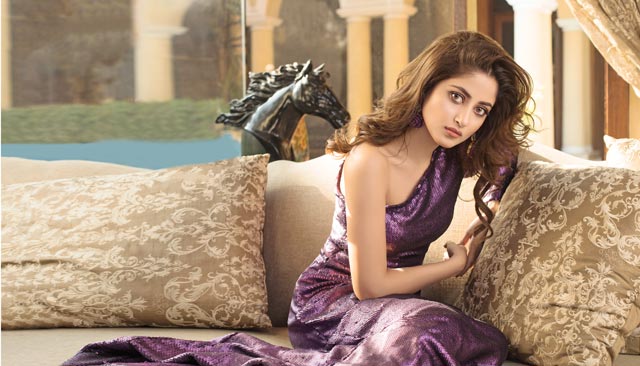 Sajal Ali is a rare combination of beauty, talent and sheer determination. She puts her heart and soul into each project she takes on, each character she essays, and today, she is considered as one of the most bankable and sought-after actresses in the country.
Sajal first appeared on screen in the comedy drama Nadaaniyaan in 2009 and, although it was a minor role, her acting skills sparked considerable interest. She followed it up with a strong performance in the family drama Mehmoodabad Ki Malkain, and subsequently rose to prominence for portraying leading and supporting roles in several blockbuster television series’, including Mere Qatil Mere Dildar, Nanhi, Gul-e-Rana, and Zindagi Kitni Haseen Hai. The petite, doe-eyed actress also garnered rave reviews for essaying the role of a confused and angst-ridden teenager in the award-winning telefilm Behadd.
Her stellar performances as the naïve Dr. Zubia Khalil in Yakeen Ka Safar, and the headstrong and presumptuous Sassi in O Rangreza resonated very well with audiences and gave further impetus to Sajal’s burgeoning career as a leading actress. In 2017, she worked alongside Sridevi in Mom, a critical and commercial success which further catapulted her into the limelight across the border as well.
Sajal has proved her acting prowess time and time again in a series of roles that have firmly planted her in the public’s consciousness. She is not one to rest on her laurels though, and continues to evolve as an actress, adding to her repertoire by taking on diverse roles. Most recently, her work in the TV dramas Alif and Yeh Dil Mera has elicited immense appreciation from the public.
Her roles, though few and far between, are always meaty and add value to the production.
In person, Sajal embodies the girl-next-door charm and comes across as a sensitive, soft-spoken and empathetic person, highly attuned to her surroundings.
Here, in an exclusive interview with OK! Pakistan, this powerhouse of talent talks about acting, finding true love, and of course, all things Sajal… 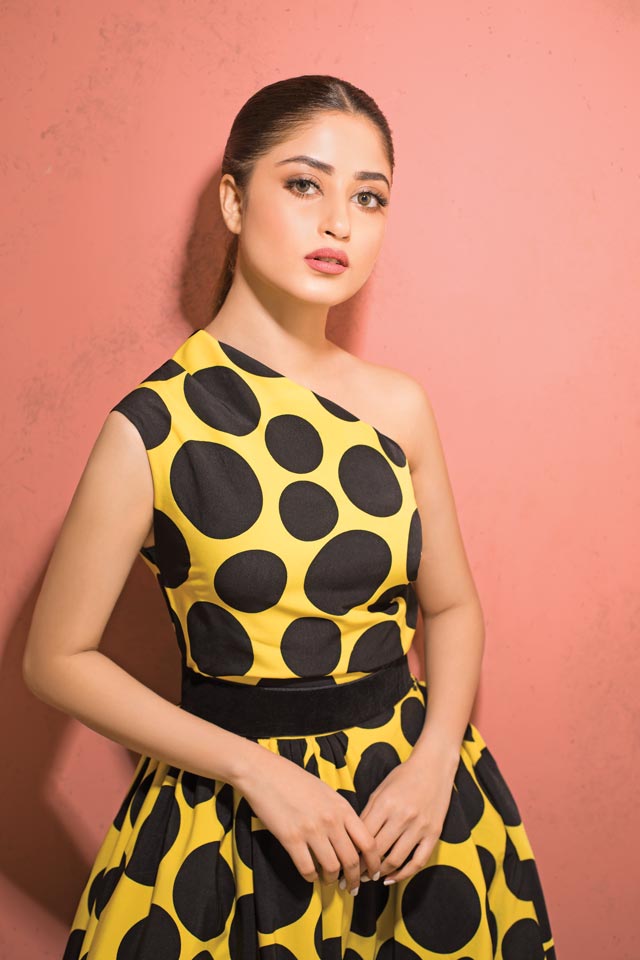 The year 2018 was fantastic for you. You made a clean sweep at the HUM Awards in Houston. Were you expecting this kind of appreciation for Yakeen Ka Safar and O Rangreza? How does it feel to win awards ?
SAJAL ALI: Of course it’s a great feeling! Honestly, I wasn’t expecting to win both the Best Actress awards, but I didn’t feel for even a minute that I’m better than anyone just because I won. But once you get so much appreciation for your work, you feel more pressure and a greater sense of responsibility to fulfill the expectations of audiences. Darr lagney laga hai ziada.
I never have any expectations from my dramas. I just want to do my best and I’m glad people like my work. Appreciation is all an actor really wants.

“Ahad Raza Mir is the kindest and most genuine person I know.”

How was it working with the legendary Sridevi? Did you learn any acting tips by watching her perform?
SAJAL ALI: Of course, she was such a great actress. I feel blessed that I got the opportunity to work with her and learn from her. I was always her fan and it was a dream come true for me to act alongside her.
She was just like my mom, she took such good care of me, especially when we were shooting in Georgia and I used to feel cold. She used to fuss over me, and worry about my jackets and blankets. She gave me a lot of strength and courage when my mother was hospitalized. Un kay saath dil ka rishta bun gaya tha.
I learnt a lot from her, because she was such a fantastic actor and human being.

The film Mom must be of great significance for you, especially as your own mom spent her last days with you in India when you were shooting for the film. Was she proud of you?
SAJAL ALI: My mother was my biggest support during the shooting spell and that was my last trip with her, one on one. I went to the Taj Mahal with her, and I’m so glad I saw it with my Amma, my ‘real love’. We had a lot of fun, we went to so many places in Mumbai and Delhi.
I consider myself blessed that she was there with me for the shooting process, and I’m sure she was proud of me. She was my strength, and she is still my strength. I still feel her presence around me. 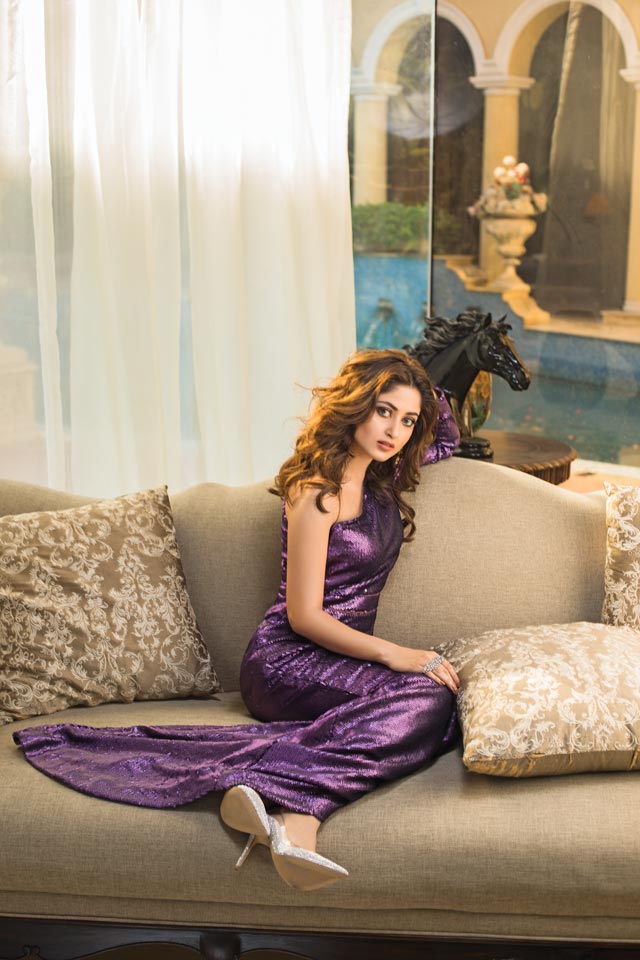 You have found true love. Please tell us how it happened. What are the things you like about Ahad Raza Mir? Is it more fun doing television serials with him?
SAJAL ALI: It just happened. I can’t explain it. What I appreciate about him the most is that he is who he is. He’s the kindest and most genuine person I know. Everyone knows that he’s one of the best in our industry and no, I’m not being biased. When you see him on stage you realise what he’s really capable of. The rest is just for me.

“I never have any expectations from my dramas. I just want to do my best and I’m glad people like my work.”

How are your two dramas going – Alif with Hamza Ali Abbasi and Yeh Dil Mera with Ahad Raza Mir? Are you relieved that they are doing well, especially after Aangan not making the mark?
SAJAL ALI: I believe I received a lot of love and appreciation for Aangan. So many TikToks were made on Chammi’s dialogues. Personally I was very happy with Aangan and how my role shaped up because I received so much love from the audience. Whether the drama does well or not commercially doesn’t matter to me, what matters is that my character makes an impact. I think I’m lucky and blessed in this regard. I’m very thankful to God.

Who is your favourite director? Ehteshamuddin, Sarmad Khoosat or Haseeb Hussain? What are the qualities that are unique to each one of them?
SAJAL ALI: Actually this is a very difficult question, and perhaps I won’t be able to answer it. I’m lucky I get to work with the best directors we have. They are all fantastic in their own right, and are very, very serious about their jobs. They all know how to extract the best work from an actor and I consider myself lucky that I have been able to work with all three. 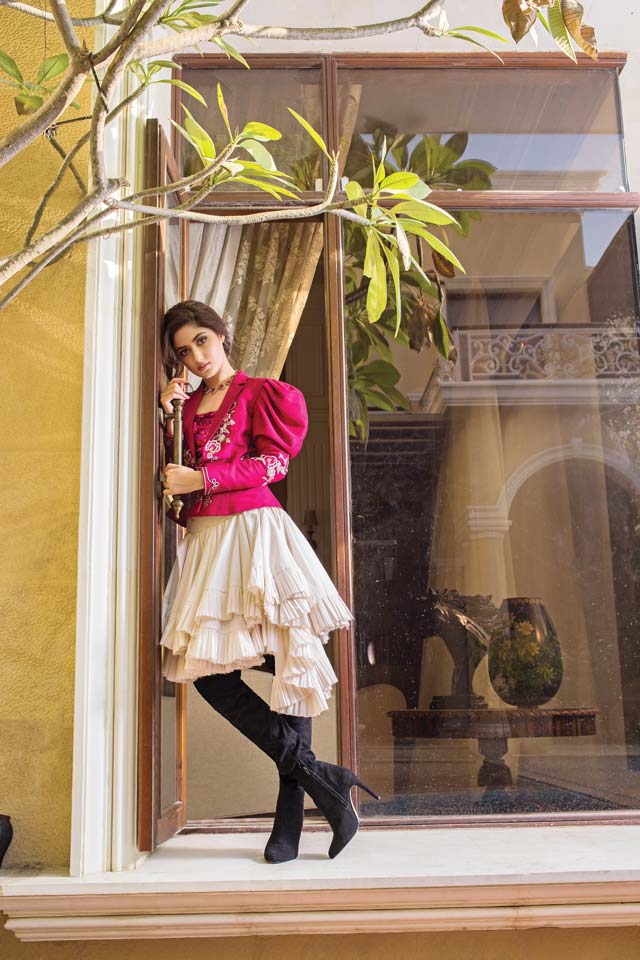 “There are one or two films I’m considering at the moment, the scripts are amazing!”

What is your method of acting? Is it spontaneous or more method-based? How do you prepare for your roles?
SAJAL ALI: Honestly, I have no method. It’s the role that calls out to me and I just perform naturally. But I’m never happy with my work and don’t watch my own dramas because I’m too critical of my acting.
As far as preparation is concerned, I just read the script and get a feel of the character. I immerse myself in the character and the rest just follows naturally.
Also, it’s not necessary that all actors should have a method of acting.

It’s a house full of actors – Ahad and Asif Raza Mir, Saboor and you. What’s the conversation on the dinner table like? What are the topics of discussion?
SAJAL ALI: When we are all together we are a family. There’s nothing more to it. Yes, when the conversation gets artistic there is no end.

What’s next? Are you going to go back to doing films? Did you like Parey Hut Love and Superstar? What’s your take on the movies being made in Pakistan currently?
SAJAL ALI: Yes, of course. In fact, there are one or two films I’m considering, the scripts are amazing!
I saw both Parey Hut Love and Superstar and I really liked them. We are now making some really good films, so I will definitely be taking part in films as well.