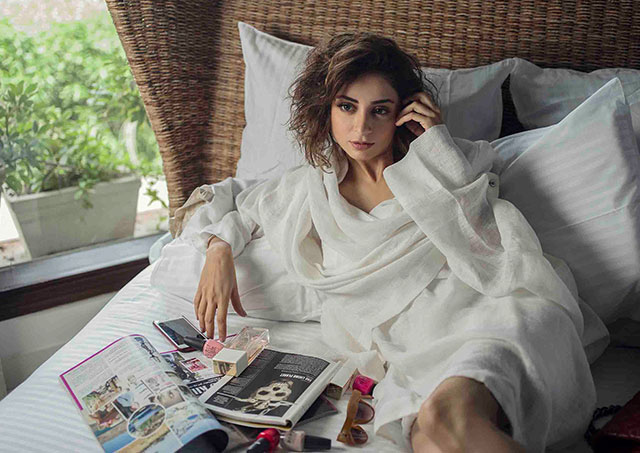 “No matter how hard you try to make something happen, it will only happen when it’s meant to happen – and at the right time”

Sarwat Gilani is an actress who believes in perfectionism, and that ‘less is more’. An interior designer at heart, she is also a brilliant actress. Her TV stints leave the audience craving more, but she believes in scripts of substance.
“I’ve always been a believer of quality over quantity. I have always done one project or maybe two in a year, and I’ve followed that pattern throughout my whole career,” she tells us. Sarwat wants to be the actor people see in a television play, and stay on that channel just because they know that show will have substance and be worth a watch.
“And by the grace of God, I do get that compliment a lot. I don’t want my fans or the regular viewer to get sick and tired of seeing my face all year round either.”
Here, the beauty talks to us about what she would like to change about the industry, which actors and actresses inspire her plus a whole lot more…

How much is Sarwat Gilani, the actor, different from Sarwat Gilani, the person?
SARWAT GILANI: Believe it or not, but in reality, I’m a very camera shy person. I become very awkward when the camera turns on. I am very easygoing at home but at work I want everything in order. I like to keep my work life very organised while in my private life, I’m very spontaneous and love to explore new places and go on adventures. I’m also a sensitive person inside so I keep a very strong demeanour at work so no one can affect or distract me.

What is the one thing you would like to change about the entertainment industry?
SG: I believe Pakistan has a lot of talent and hard working people but what we lack is professionalism. Although there is an enormous amount of time, effort and money that goes into a production, the result is usually far less than what it should be. We are in a state of ‘ordinary’ because the job is being done but people aren’t really that motivated – or driven to meet a deadline in the best way possible. There is no concept of time management, there is hardly any respect for the work and even for the people involved sometimes. The only way we can fix this is through education –education of the craft and awareness of the rules to retain its sanctity. We need institutions that teach producers how to not only be part of the entertainment business but also take some responsibility in the process; actors need to be made aware of their rights; actors need to polish their ‘acting skills’ rather than their ‘political skills.’ These institutions should teach actors everything we already know and do but in a more polished way. The team directing the production will always push for time management, and we need to teach everyone involved the same thing. Casting directors need to understand how important casting is – it would save a lot of time and money, enabling us to produce better projects. However, I would say it is unfair of us to expect professionalism from these people when they are unaware of what international standards of this business are. So an institution is very much needed at such a crucial time when the film industry is flourishing and our social media is becoming so accessible to the general public. 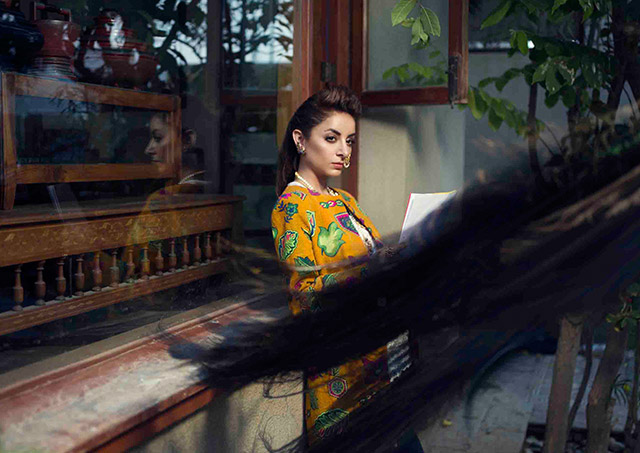 “I’m a sensitive person inside so I keep a very strong demeanour at work so no one can affect or distract me.”

A role you’ve played that you absolutely loved?
SG: Linta in Khasara; it’s a perfect example of a strong yet dependent woman in our society, and no matter what position she holds financially or socially, she still depends on her husband’s attention and affection to stay happy. Every time I step out of my house, women come up to me and tell me they can relate to Linta and her insecurities because they have or are going through a similar situation. And it’s when you hit a chord in the audience’s hearts, you know you have done justice to the character.

A role you would really want to play?
SG: I would love to do someone’s biography. I feel it’s very challenging for an actor to adopt the characteristics of an already existing personality, imitate them and then also bring something of your own to the table.

Television or film?
SG: Both have their own charm. There is still time for our film industry to experiment with artsy scripts; on TV, the stakes are not as high and these experiments have already taken place. Film is obviously on a larger scale so the affect and response is also just that more glamorous and enormous.

Talk to us about the casting couch syndrome and politics in the film industry.
SG: They say ‘Where there are wolves, there will be quarrels…’ So in an industry that is so competitive, the stakes of losing a project are high, and way more than just a casting couch situation… 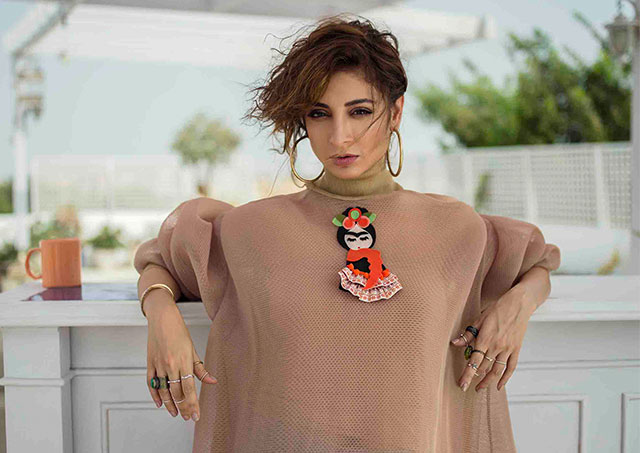 Do you pick projects based on scripts, casts, directors or a bit of everything?
SG: It’s definitely a bit of everything. If the director is good, then his or her interpretation of the script will be good too. If the co-actor is good, then it will be a good action-reaction that people will enjoy. Also, the channel on which the play will run holds a lot of importance too.

So many Pakistani movies have come out in the last two-three years. Any that you really liked?
SG: I loved Cake – it was perfect in every sense. The story, the relatable relationships and the void in between them, and then of course the well-knitted scenes were worth watching twice. My second favourite was Moor by Jami. It was definitely a visual treat, and of course the concept of mother to Mother Earth was a thing to take back home. Last but not the least, Manto by Sarmad Khoosat was the best way Manto’s story could’ve been told. These films changed something in Pakistani cinema, and Manto was conceptual storytelling, which in this day and age of commercialism is very rare. 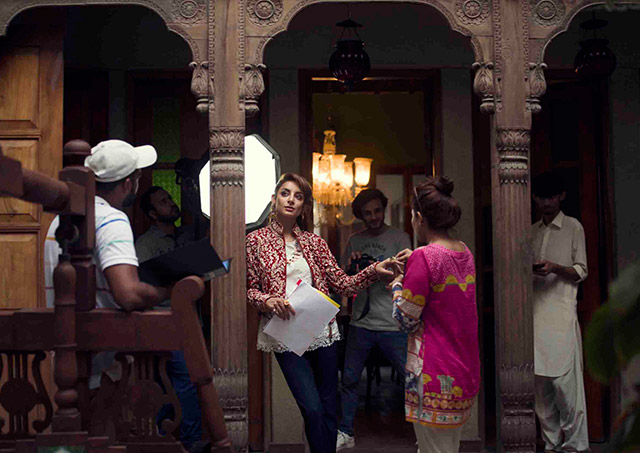 “It’s when you hit a chord in the audience’s hearts that you know you have done justice to the character.”

A director you have absolutely loved working with and why?
SG: Haisam Hussain – his love for detail and intricacies made me understand that God really is in the details. And Mehreen Jabbar for her realistic approach to storytelling made me understand naturalism is in acting.

Pakistani actors who really inspire you?
SG: Nadia Jamil for her realistic acting, Marina Khan for her wit, Shahnaz Shaikh for her charisma and Saba Qamar for her diversity.

How did you end up meeting your husband – was it destiny?
SG: Fahad and I met in 2002 and then reunited in 2012 – it was destiny for sure because in a world full of millions of people, who could’ve imagined that two people would meet again after ten years and start from where they left off? After reuniting with Fahad, I understood no matter how much you may try to make something happen, it will only happen at the right time when it’s meant to happen so we shouldn’t regret anything and believe the best is yet to come.

How supportive has he been of your career choice?
SG: We both believe in growing as a unit and in our own individual capacities as well. There are many times when he would say he is so proud of me but that is mostly for my philanthropic work while as an actor he usually pushes me to embrace myself and encourages me to take on projects that I want to, giving me the comfort that he will handle things at home. I am very blessed to have a companion who I know will stand by me in anything I want to achieve.

Words of wisdom, or advice you received from someone that has stuck with you?
SG: Don’t let people take advantage of you by putting a stop to it the first time they even try. Make your weaknesses your strengths, and set bigger goals to motivate yourself to achieve those goals. Women should give at least ten to 15 minutes to pamper themselves every night – indulge in a nightly regimen and relax their minds because they are only multitasking the rest of the time.

If you could go back and change one thing in life, what would it be and why?
SG: I would change nothing since everything I’ve done has made me who I am today, and I am very proud to be who I am and where I come from. But as a society, I do wish that we were more aware of our social responsibilities.

“I would change nothing [about my past] since everything I’ve done has made me who I am today, and I am very proud to be who I am and where I come from.” 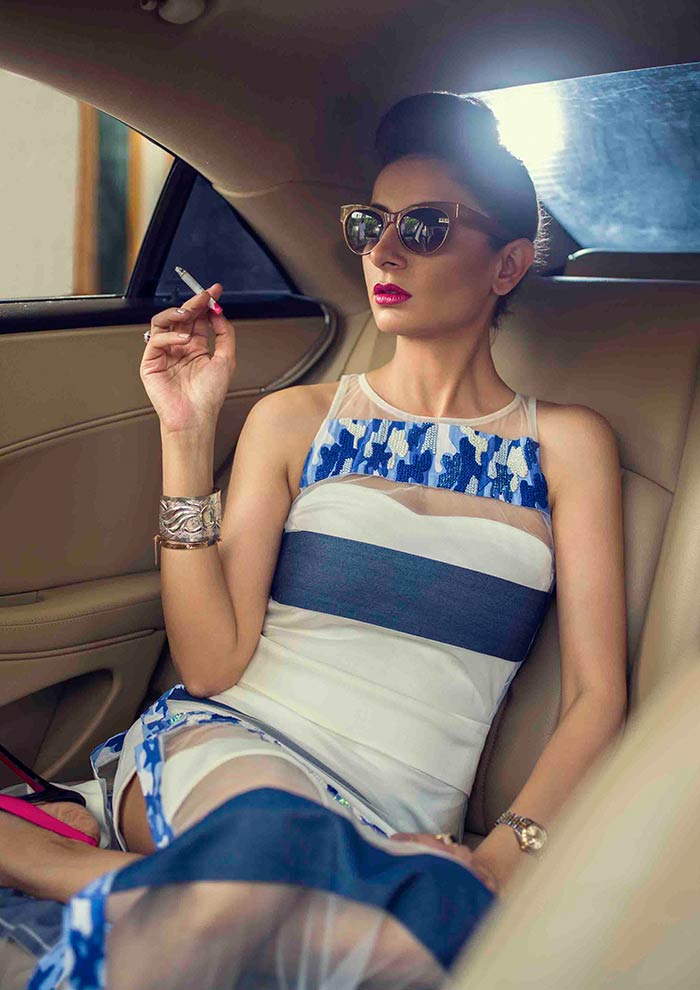 Tell us about upcoming projects.
SG: We are working on a national song for the Special Olympics Pakistan athletes; it’s been written by Anwar Maqsood saab and sung by Strings. We are in the process of approaching different directors who will direct the video. It was a dream for me and now we are very close to it so I’m super excited. As for acting jobs, I’ve had a few offers but nothing is clicking at the moment and since I don’t do much work all year round, I’m not in a hurry at the moment. As an interior designer, a penthouse’s work is in progress and I can’t wait for it to finish.

A LITTLE MORE ON SARWAT GILANI

Three things you always have in your bag?
SG:My pride, a little humour and a ziplock of free smiles.

If you were president for a day, what immediate change would you bring in the country?
SG:Make education free for all and the rest will follow automatically.

If you could change one thing about the film industry in Pakistan, what would it be?
SG:To make more women-centric films.

If you were not an actor, what would you be?
SG:An artist who painted the city walls with big murals based on social messages.

Do you cook?
SG:Only for my kids.

Beauty essential – a skin care product you use and swear by?
SG:Aloe Vera.

If you could move to another country, where would it be? And why?
SG:Rome, for the classic and modern architecture that co-exists so beautifully.