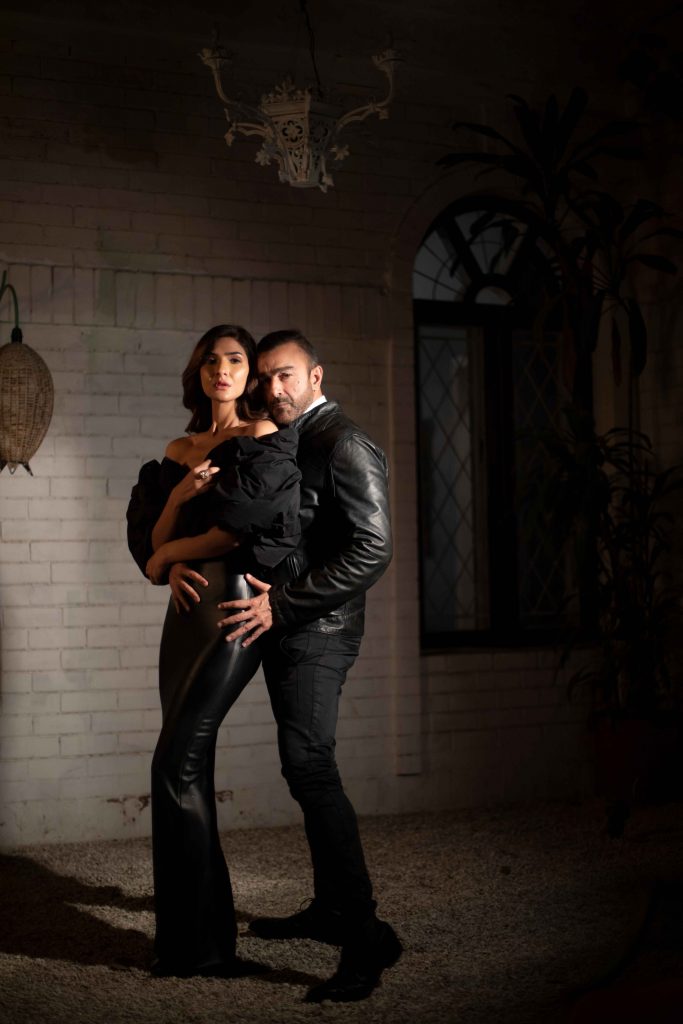 The much delayed yet anticipated spy thriller Zarrar is slated for a release this March. Starring Shaan Shahid and Kiran Malik in pivotal roles, the feature film is helmed by a team of ace professionals, and is shot in multiple, scenic locations. Shaan makes his return to film in almost five years since Arth 2, while Kiran Malik joins the project as the female lead, essaying the character of a journalist. Joining the ranks of Shaan and Kiran are Nadeem Baig, Shamoon Abbasi and Hajra Yamin. As our cover stars, Shaan and Kiran discuss their forthcoming movie, Zarrar and give us many reasons why we should watch their film!

Shaan, since Arth 2, which was released almost five years ago in 2017, we haven’t seen you do many projects. Why is that?
SHAAN SHAHID: I am planning to take up production seriously, which is why it took me a while to return since Arth 2 and now, Zarrar. The latter project will be released on 23 March, and after that, we will be releasing other new projects. I just finished a beautiful script with Bee Gul. It is a love story. So, hopefully, by mid-March, we will be in London filming again. 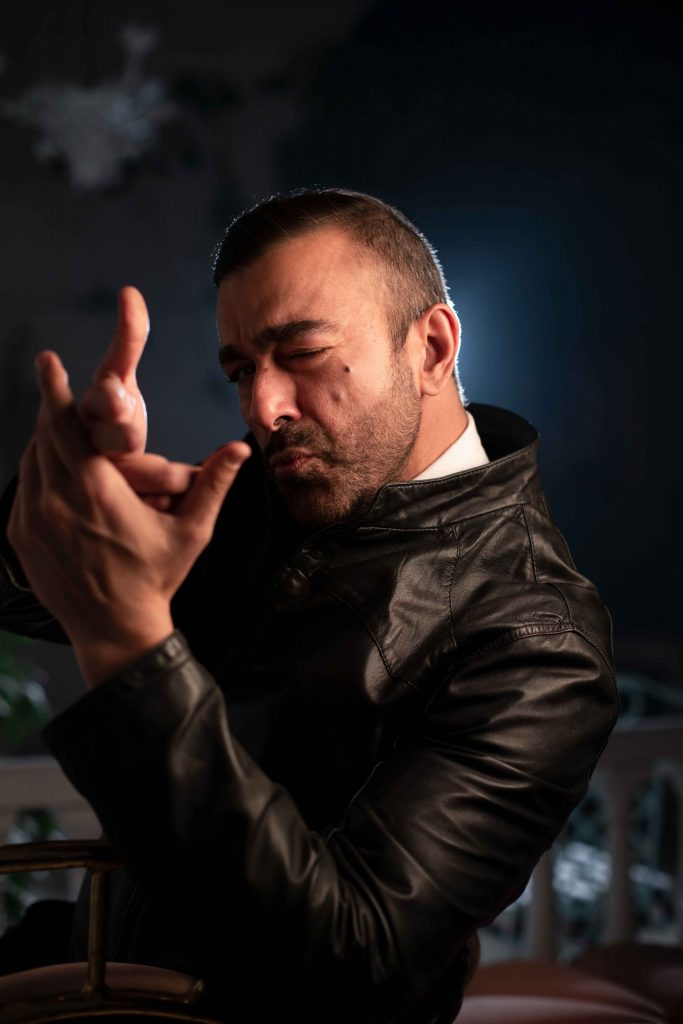 Do you plan to venture into television? If not, what are your reasons? And why do some of our established actors refuse to experiment with small-screen projects, considering that our television industry creates far more compelling dramas than films?
SS: I would love to venture into the new Over the Top (OTT) platforms. It is a great opportunity to do good work and connect with fans. As far as television goes, people are doing decent work, but the scripts are more geared towards women. I have nothing against that, but we need to change our scripts a little. Plus, there should be some form of boundary for artists to not expose themselves on-screen to draw the audience. Overall, television seems to be a good medium but personally speaking, I am made for films. By March, we also plan to undertake a few OTT productions.

You have been vocal in the past about not wanting to work in Bollywood, expressing your desire to focus more on Pakistani cinema. Although that is important, our cinema is still struggling after all these years. Where is the progress lacking, in your view?
SS: Well, there are many reasons not to go to Bollywood. First of all, the Pakistani industry needs to recover, and all my talent and hard work are needed here. I can’t just jump the ship and think of my career only. I have to look at everything in its totality.
Unfortunately, the Pakistani government does not realize the power and soft image that our films carry. They are not putting a lot of effort in our industry. As far as India is concerned, it is heartbreaking what they are doing to the Muslim community, and other minorities including ethnic cleansing of many. My stand is not a big stand but it does make a difference. So, I take a stand on human rights violations being carried out in India.
A lot of people say that there are no boundaries for actors when it comes to work. They are at liberty to go work anywhere they want. Well, I would ask them right now to try and apply for a visa to work in Bollywood films. Indians would make sure that they see that boundary.

Talk to us about your forthcoming film Zarrar, and your character profile in the movie?
SS: Zarrar is a great film. I loved directing, writing and working in it in its totality. It was lovely collaborating with such great actors. Kiran and sir Nadeem were amazing, including the British cast. Zarrar is the first spy, action-thriller film that will come out of Pakistan’s entertainment industry. I had a great team to work with, from technicians to producers. The music and action sequences of the movie are great!
You don’t really get to know about my character in the first half of the film. However, the latter half reveals more information about him as you learn his reasons for being silent in the first place. We shot the project in numerous locations including Lahore, Karachi, London, Turkey and the Pakistan-Afghanistan border. It was a good team effort, and hopefully, the film will do great at the box office! 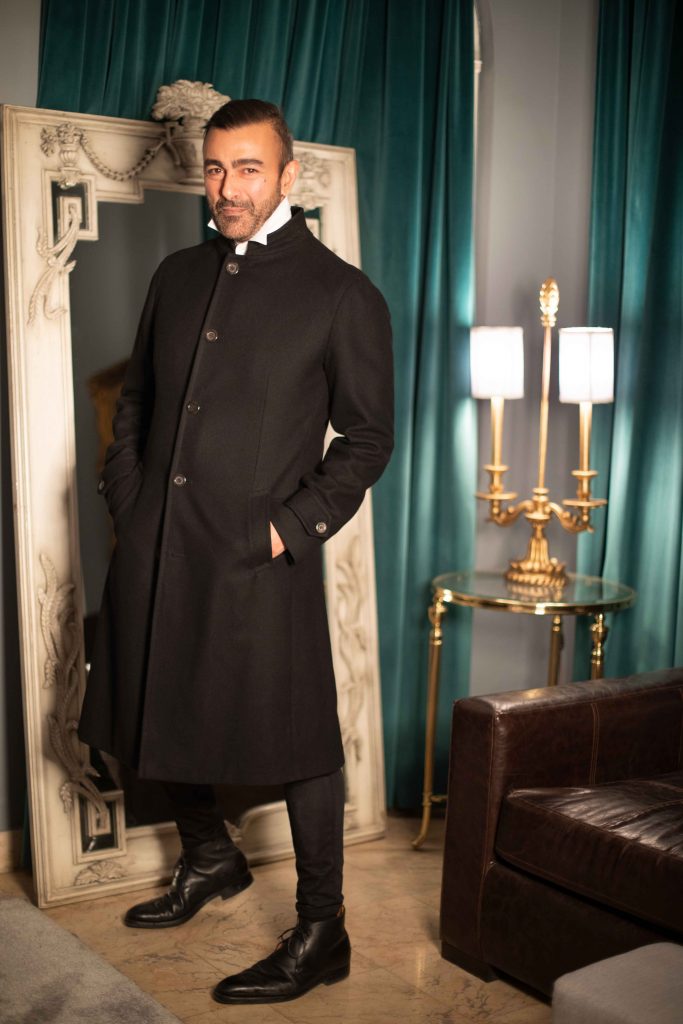 To conclude, anything you would like to say about bringing hope into the new year?
SS: 2022 is here, and we, as a country, need to come together and unite for a greater purpose, and that is Pakistan. We must put in our efforts and bring Pakistan on the forefront of the entertainment world. We are going through tough times right now, but tough times don’t last; tough people do. As a country, we have been through so much, from corrupt politicians to all the restrictions that were put on us by the West.
We are still struggling, but hopefully, we will reach a new milestone for Pakistan’s entertainment industry. I am hoping that the country comes out of its troubles. Our overseas Pakistanis are of great help, too! What they can do for Pakistan, wherever they are, is more than what we can ever do living here. If they can unite and support Pakistan through any platform, that’d be of great help!

How would you describe yourself?
KIRAN MALIK: I am a go-getter. I always plan at least five years ahead to work towards a goal. I am also a very positive person. I take my family and friends’ opinions very seriously, but the end decision I settle on is mine. I am someone who knows exactly what I want to achieve in life. 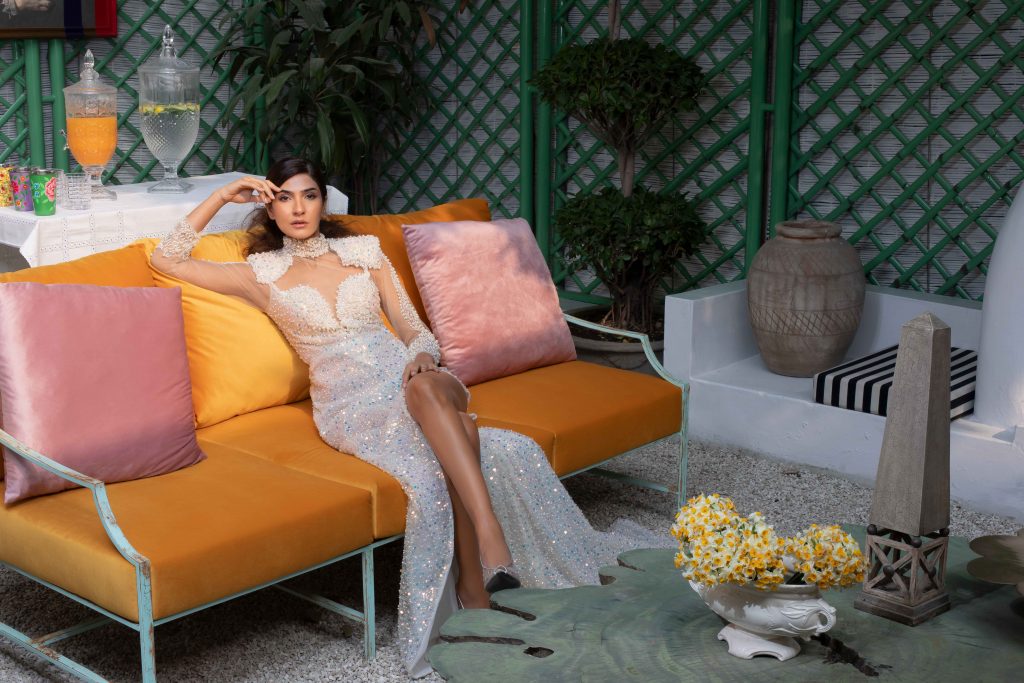 How did you start out in the entertainment business?
KM: I am an HR consultant by profession. A lot of people don’t know that. I started modeling 14 years ago and have worked with all the big names in Pakistan and abroad. I recall hosting a ball when HSY came up to me and requested that I open the show for him as a model. Once I did that, I came back to Lahore where I met Ather Shahzad and started working with him. There was no going back! The credit really goes to HSY, who saw the potential in me to contribute to the fashion industry. I joined the film business six years ago. I haven’t done any dramas yet, but all my work so far has been relevant to films.

How are you navigating the world of show business since Pinky Memsaab?
KM: Pinky Memsaab was a breakthrough project for me acting wise. Before that, I did Zarrar, and as you already know, it didn’t get a release date back then. Pinky Memsaab was a semi art film, and a lot of people didn’t expect that models could act. That project, in a way, changed the viewers’ perspective around models’ ability to act. I received great feedback after the film, and have since done great work!
I also did a film with Faysal Quraishi titled Money Back Guarantee. Then I did a song for Adnan Siddiqui’s film, another song for Atif Aslam and a campaign with Fawad Khan. I will say that Pinky Memsaab has surely taken my career many steps ahead because no one knew I could act prior to the film’s release. 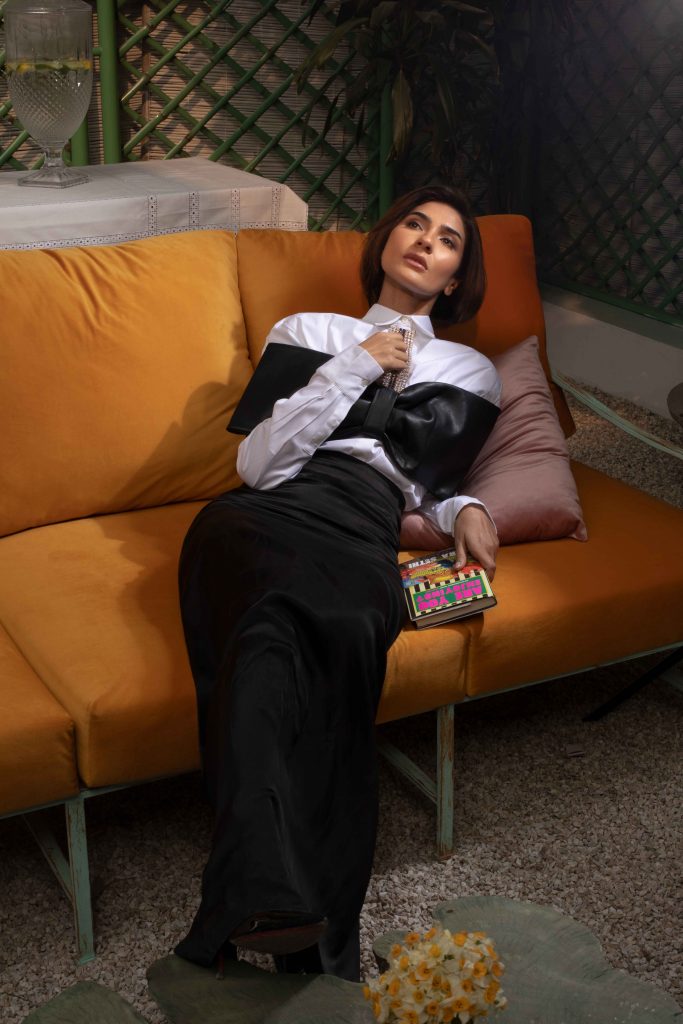 You play a journalist in your upcoming film Zarrar. How did you land the role?
KM: Zarrar for me was a surprise. I met Shaan in Karachi and had a fan moment with him. I recall vividly that it was at a café. A very dear friend of mine was with Shaan and that was the time when he began observing my body language or the way I was conversing with him. In less than 24 hours, my friend called and said that Shaan wanted to offer me a role in a film.
Shaan narrated the story of Zarrar on call. I really liked it but wasn’t sure if I could do justice to the role or make myself comfortable enough in the film. I had no background of acting, and fashion is a completely different world. However, the credit goes to Shaan for providing me with a sense of comfort and support. I hope you all like Zarrar because I have given my 200 percent! 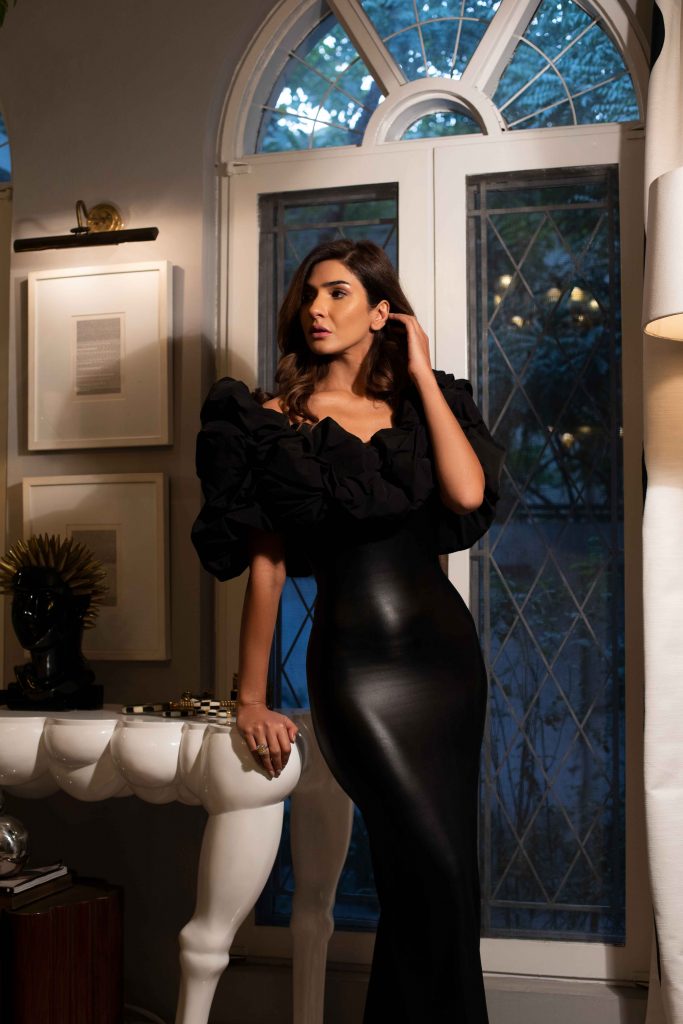 What preparations were necessary to bring a journalist to life in a project like Zarrar? Did you study any specific journalist to bring more nuance in your character?
KM: It took me a while to convince myself that I could do justice to the role. When I finally decided to do the film, I sat down with Shaan many times and went through the script. He wanted me to watch all the current affair shows to observe the body language of journalists. I also started reading up on journalism a bit! Shaan has really been a mentor for me when it comes to acting! 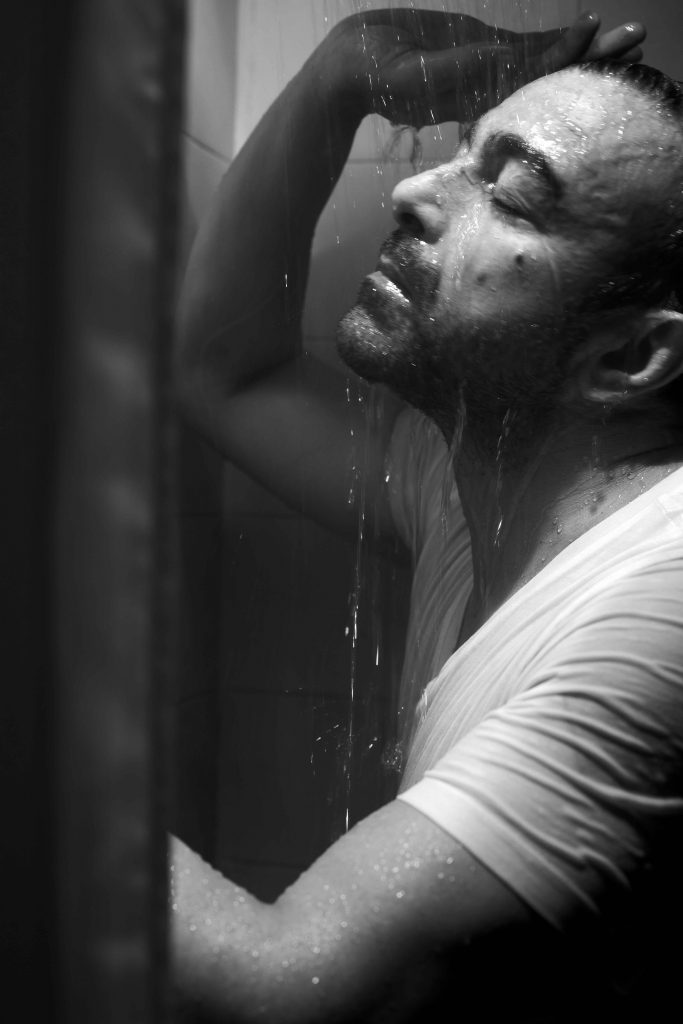 The one thing you cannot live without?
Family.

Any book you would recommend…
“The Alchemist”.

A piece of advice that changed your life?
Keep learning and keep changing.

Favourite luxury brand or item you own?
Porsche 911.

Best holiday destination?
Been there, seen all. Home!

Most inspirational person you know?
My mother.

Your most memorable experience?
Falling in love at first sight with Aminah…knew she’s the one!

One thing that you love about Pakistan?
The potential. 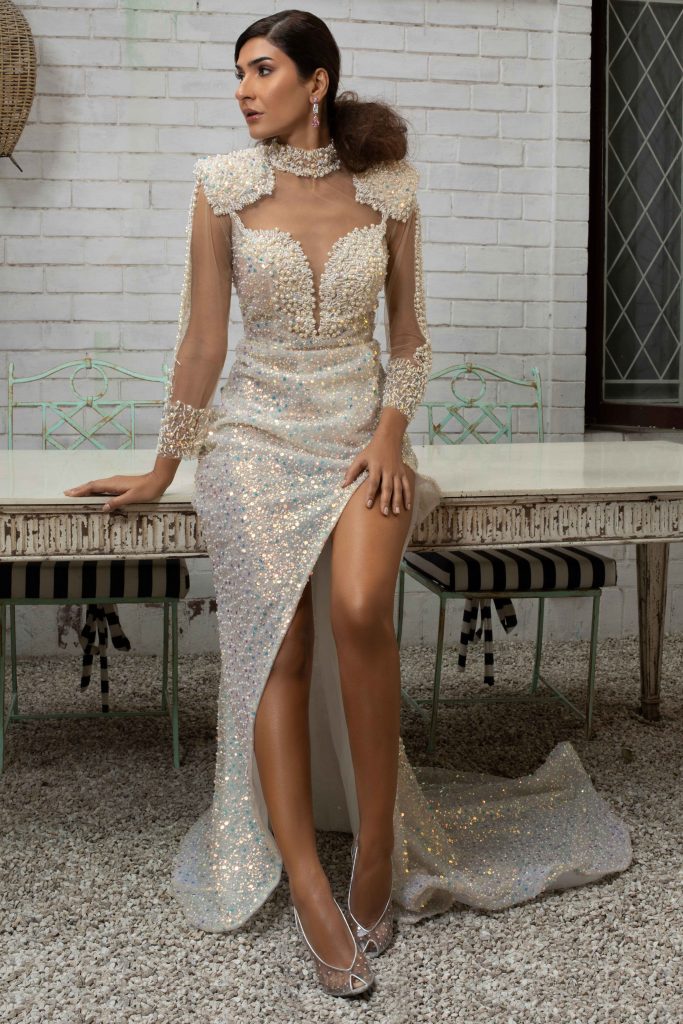 Three words that best describe you?
Resilient, optimistic and forthcoming.

The one thing you cannot live without?
My Imaano.

Words of wisdom or favourite quote?
“When you write the story of your life, don’t let anyone else hold the pen.”

Any book you would recommend?
“After the Prophet” by Lesley Hazleton.

A piece of advice that changed your life?
My father always advised me to set achievable goals and go all out to fulfill them.

Favourite luxury brand or item you own?
Chanel.

Most inspirational people you know?
My parents.

Your most memorable experience?
Performing Umrah with my daughter.

One thing that you love about Pakistan?
The hospitality of our people.