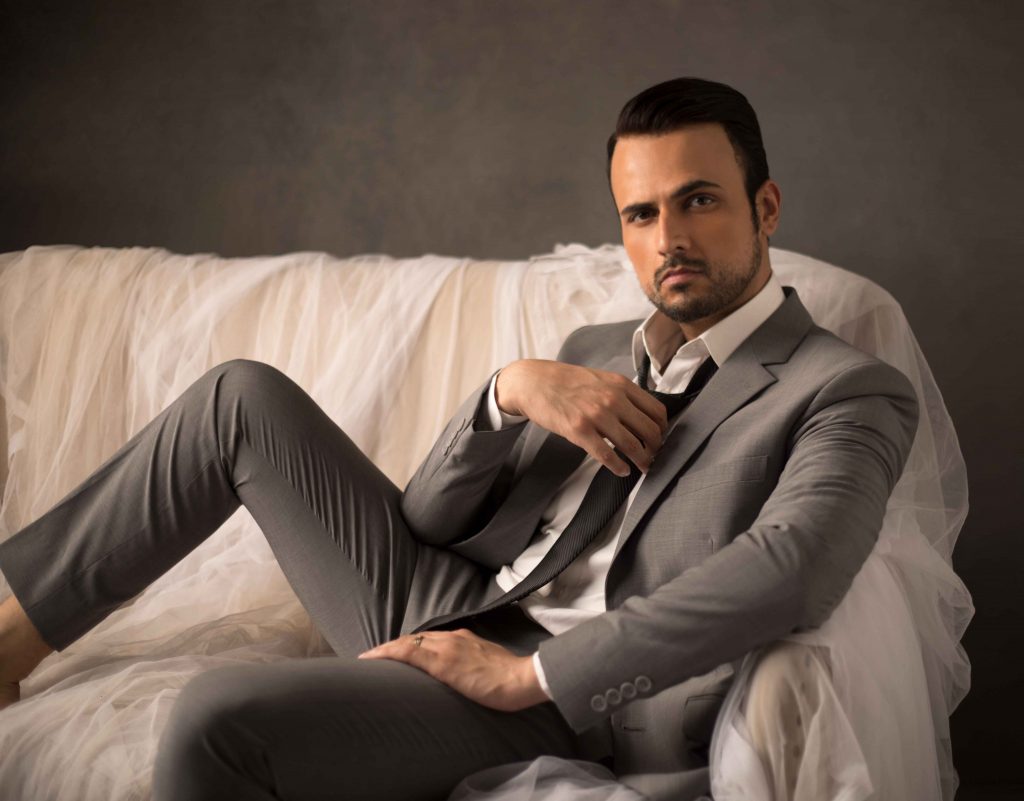 Before becoming a household name, Usman struggled to make his mark for years – something he never shies away from sharing. He dons many hats; he is an actor, a director and a cinematographer. Although his core passion lies in direction, Usman is probably recognized best for his on-screen film and television roles, starting with his first mainstream feature film Janaan before landing a prominent role in Parchi.
Usman then shot to fame in his debut television drama Anaa, which earned him countrywide recognition. He followed the success of this project with another commercially viable drama play – Sabaat. We will now see Usman in a major film role opposite Sanam Saeed in an untitled project. Uncover more about the budding star in an in-depth interview with OK! Pakistan.

Usman, you have been giving back-to-back successful performances with Janaan, Parchi, Anaa and Sabaat. What is the secret to your early success?
USMAN MUKHTAR: I don’t think it is early because I have been in the business since 2005. It is just that I was more inclined towards theater and direction a lot. I was more interested in parallel cinema and didn’t pay much attention to commercial projects. I feel that God has been too kind for allowing me to achieve success. People have shown so much love. I feel that I am a little selective with scripts and wouldn’t do as many projects as people would expect.

You have struggled in the past in not landing solid acting opportunities coupled with pushback from your family. What did you manage to do that has now helped you establish your presence in the industry?
UM: It is hard work and persistence. I have met so many young actors who end up quitting simply because they don’t land acting projects. That time came on me as well. I considered quitting the field several times but decided otherwise. You have to be persistent and passionate about acting, and eventually you will get there. Hard work always pays off! 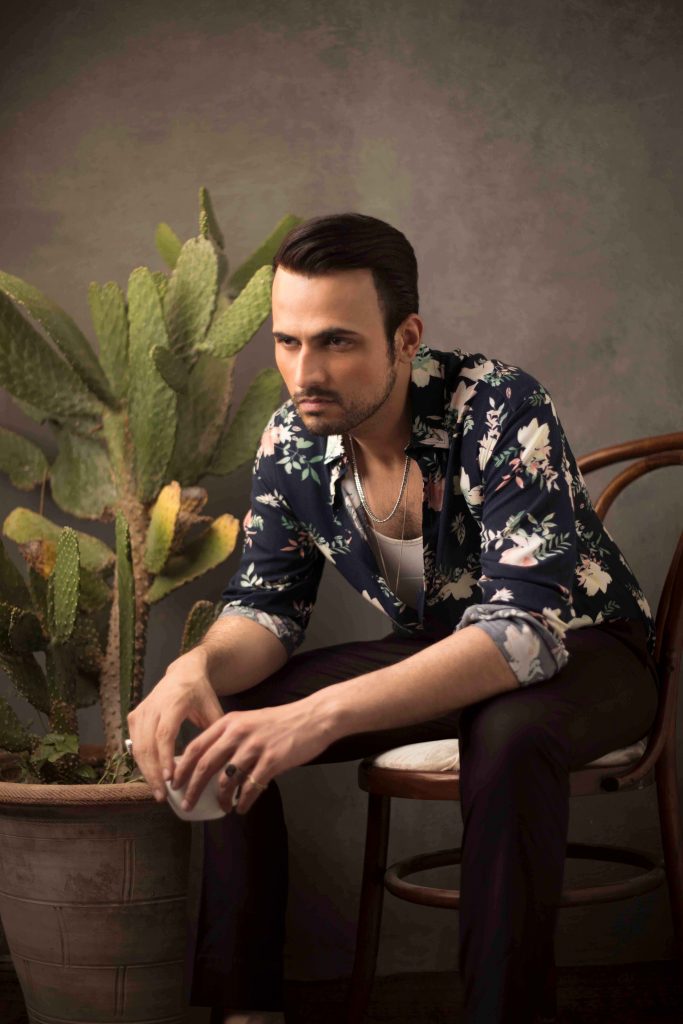 Anaa or Sabaat? Which drama has been more fulfilling for you acting wise?
UM: For me, it is Anaa. We had so much fun shooting it and the character was also a little more interesting.

Masses appreciated your last role as Dr. Harris but he did come across as someone who couldn’t stand his ground in marriage. Do you acknowledge this character flaw?
UM: I do acknowledge this character flaw, but I also disagree with it a little. Why is it that we always want a man to stand his ground? We expect a man to be stern. I believe marriage goes both ways. Dr. Harris is the kind of character who would give his better half some space and let her take her own decisions, and that is what he did.

How do you ideally prepare for your characters?
UM: I learned to prepare characters through theater. I made the habit of making a character real for myself while giving him a backstory. What are his life struggles? Does he have parents or siblings? With all that, the character kind of comes out. 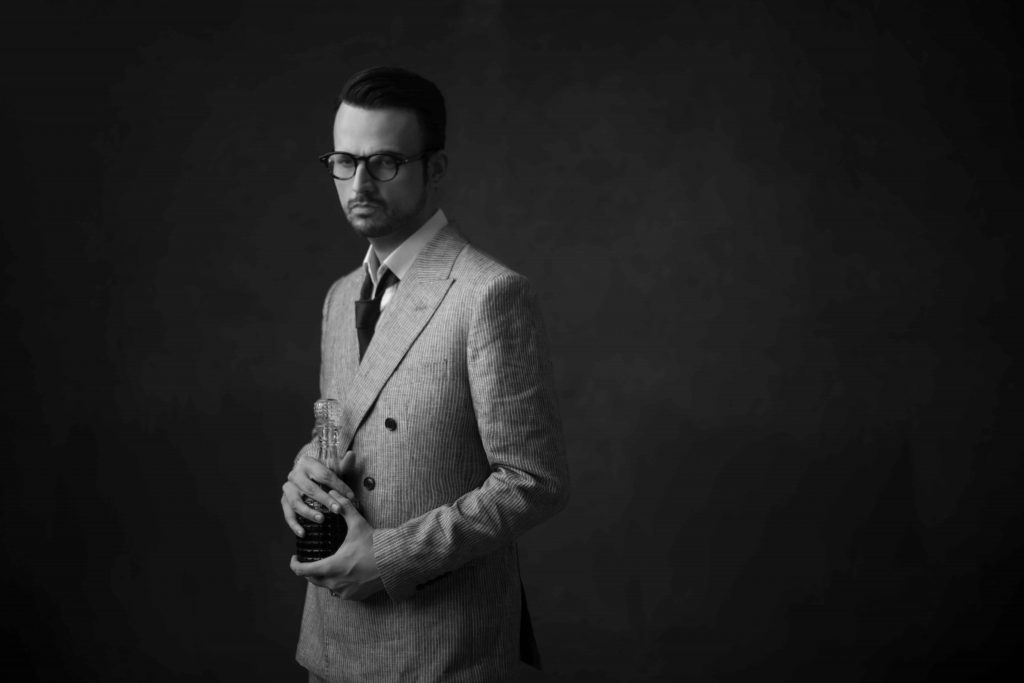 You have also wrapped a new film opposite Sanam Saeed. Give us some insight.
UM: Unfortunately, I am not allowed to say anything about the film. We have signed strict Non-disclosure Agreements, but I can tell you that it is a very interesting film. We are really happy with the finished product. We have wrapped up and I am glad I got to work with Sanam. She is a great actor! We have some other good actors too and I am really excited to share the screen with them.

Your drama short Bench made headlines last year and was a finalist at the Independent Short Awards. Tell us what was your vision for the film and what does the plot center on?
UM: Bench was just like another short. I was trying to detox after shooting Anaa. I hadn’t done anything direction wise in a long time. I just really wanted to direct! A friend of mine, Ali wrote the script and he said let’s shoot. I asked Rubya if she was available, and she said yes. We had no idea we would submit the film to festivals and that it would get the attention it got.
We didn’t have a vision for it. We just wanted to make a good narrative and put it out there. The plot is based on a conversation between two people sitting on a bench in a park. We do plan on releasing the film pretty soon. 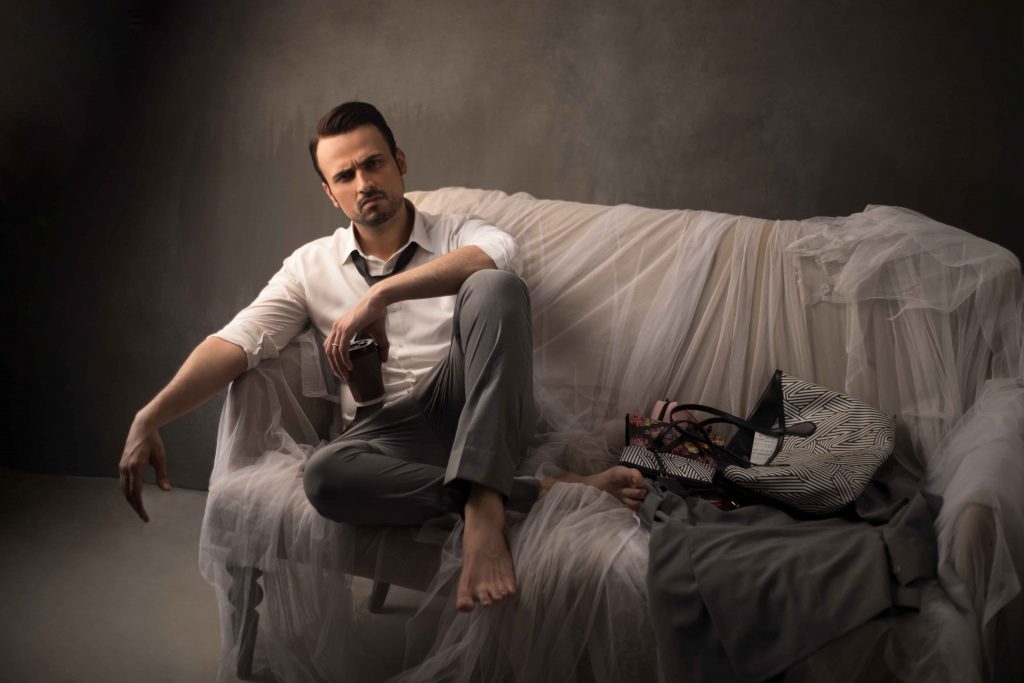 You stated in our previous interview together that direction is your core strength as an artist. Why haven’t you capitalized on it fully yet aside from short films? Does commercial cinema have something to do with it?
UM: Direction is my first love and I want to direct more. The only problem is, producers don’t want to invest in the kind of stories I want to tell. That is why I don’t get a lot of producers who are interested and that is why I haven’t really done a feature yet. I would love to, I want to, and I hope that day comes when I am able to direct my own feature film.

Do you feel that an individual’s artistic vision, be it that of a director or a writer, is often thwarted by industry giants and media houses who view a television or film project from a commercialized lens?
UM: That happens all around the world. Your masses want to see something and the producers want to make that. Parallel and indie cinema don’t have that kind of a mass appeal, so people don’t want to risk making content that will be seen by a specific niche. There are so many opportunities and platforms that give opportunities to up and coming talent. The digital age has now taken over. You can make something and put it up. If it is good, it will get picked up. If not, people will not really notice it. 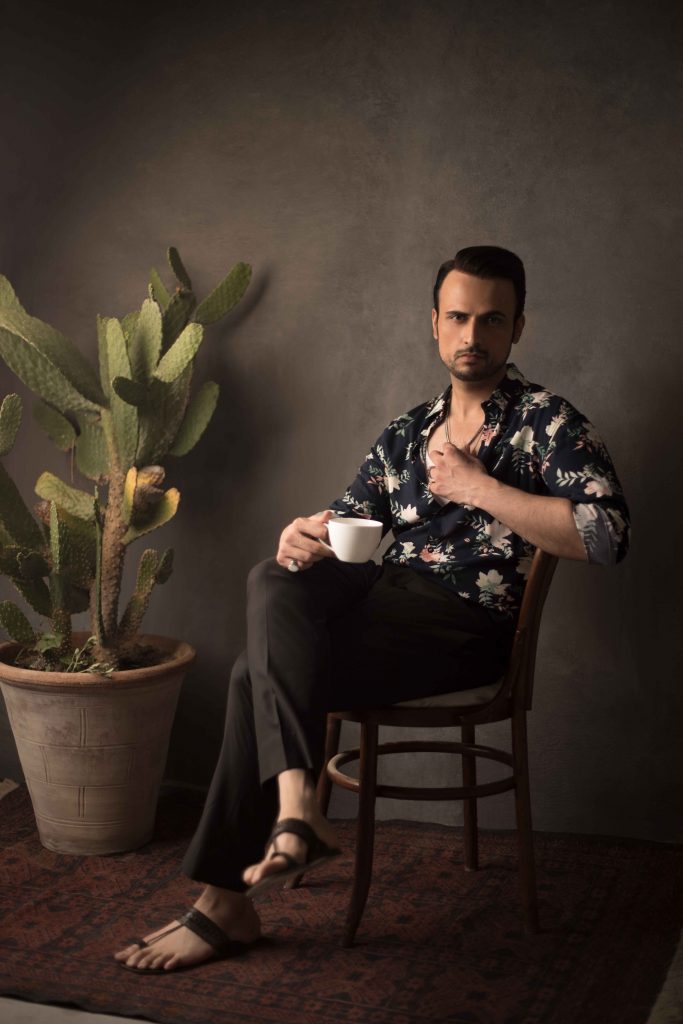 The web industry has thrived in recent years. Is it catering to an audience particularly in Pakistan that appreciates quality storytelling, for instance Churails and Ek Jhooti Love Story, as opposed to a majority of Pakistanis who prefer the commercialized rom-com genre?
UM: Everybody has an opinion, and everybody has a choice. Your masses want to see commercialized rom-coms, and they have the right to watch those. There is a specific niche that wants to watch different content, and they have the right to watch that. I am glad that quality content is being produced for the web. This would open up opportunities for up and coming filmmakers.

Let’s talk a bit about COVID-19. You were diagnosed with it last year and have since recovered. What has your road to recovery been like?
UM: My road to recovery has been difficult. I was overweight and was supposed to start training for my film when I was down with COVID-19. I caught the virus once I started training. I was on a strict diet during my recovery period. I was consuming lesser calories, and as soon as I tested negative, I had to get other tests done. Once they came out fine, I had to gradually build the intensity of my workouts, as my doctor suggested. I took every day as it came. Initially, I had a lot of problems stamina wise and was very weak. It was very tough but I am much better now.

Do you feel that it was an untimely move for our entertainment industry to resume on-set productions considering that COVID-19 was far from over in Pakistan and still is?
UM: This is a very tricky question because you need to understand that hundreds of crew members don’t get paid once you put productions on hold. That is a big problem. I also feel that we need to take the pandemic more seriously and follow strict standard operating procedures. I remember when COVID-19 took off, I read a booklet consisting of guidelines to follow while shooting during COVID-19. I do feel that if we follow SOPs on-sets, all will be good.

Usman, you are starring opposite Mahira Khan and Kubra Khan in a new drama play, Hum Kahan Ke Sachay Thay. Could you tell us more about it?
UM: The drama is about a family and the complexities of relationships. It is based on Umera Ahmed’s novel, and has been directed by Farooq Rind.
I play the character of Aswad Ayub. 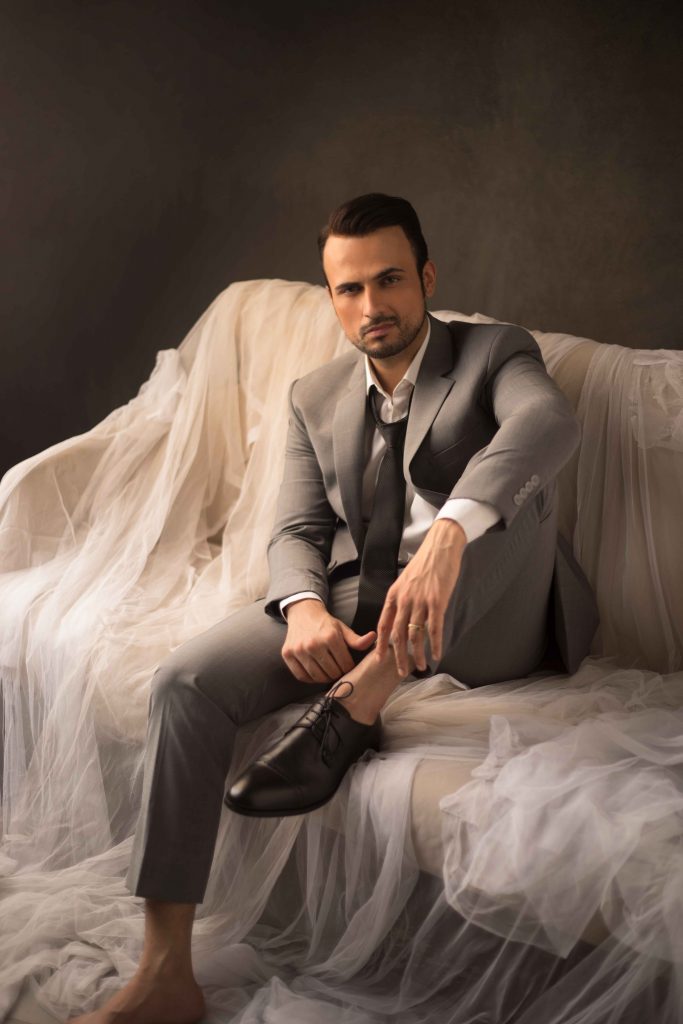 You have finally tied the knot! How does it feel?
It feels great. It is the beginning of a new chapter in our lives. We are really, really excited and we want prayers from all of you.

How do you normally unwind?
I would probably have pizza and start gaming with my friends.

What is your unfulfilled wish?
I really want to go to Iceland! I also want to make a feature film.

Theater or screen?
My artistic side wants to do theater but realistically and career wise, I want to do television.

A one liner to motivate our readers marred by the pandemic?
Follow the SOPs, please!