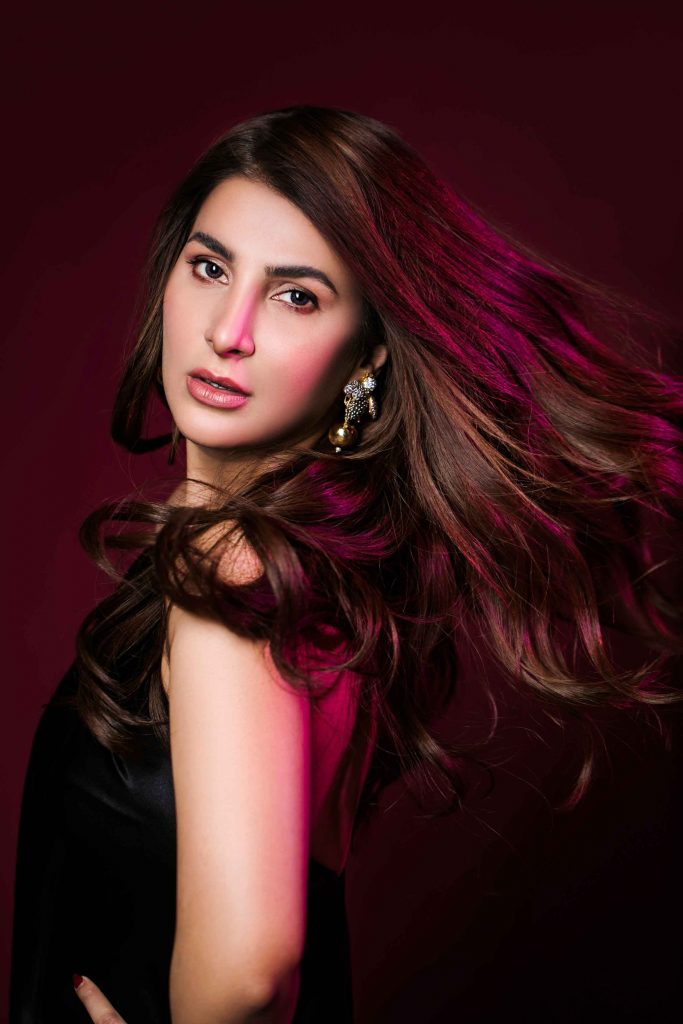 Newbie artist Areeba Habib began her career as a model and quickly established herself in the mainstream media business, rendering nuanced, powerful performances in Koi Chand Rakh and the popular play Jalan. In an in-depth interview, the dazzling 27-year old speaks out against the controversy surrounding Jalan and explains why changing the landscape of our current dramas would compromise viewership. She also gives insight into Pakistan’s cutthroat modeling industry and how her label, Areeba Habib Clothing Line, is helping plus-sized women.

Areeba, introduce yourself to our readers.
AREEBA HABIB: My background is not from the media. I am an outsider. I come from a very humble, open-minded family, and am the only one affiliated with the entertainment industry. It was quite sudden for me to transition into the showbiz world. Acting was something I planned to pursue but it was unlikely that I would take a leap into modelling. Frieha Altaf pushed me to audition, so I wound up winning it and became a model.
Modelling was tough; the competition was fierce. I was a young girl at the time, studying designing at the Asian School of Fashion Design. I had no clue about modelling at all and faced many ups and downs. People used to say so many bad things but obviously, things got better with time when I decided to pursue acting. It was the right time to change my field and opt for acting full time. 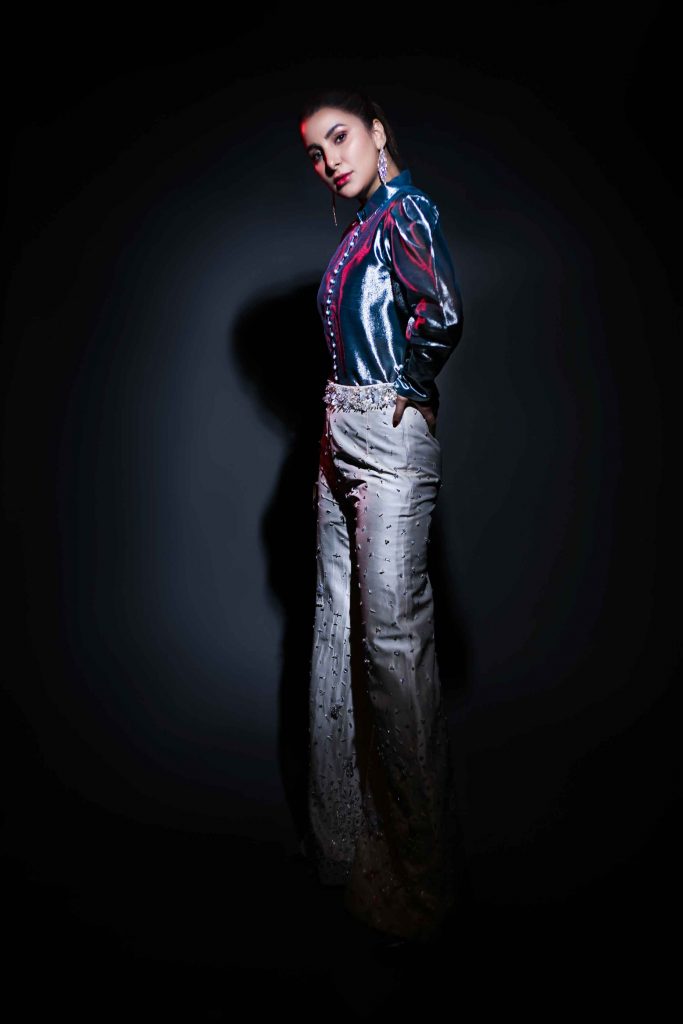 What got you into acting?
AH: I decided that I would only go for acting if I felt like it. I waited for a good script to come my way. I was offered item numbers and movies but I felt they were useless at the time. Our people only recognize actors on the big screen if they are well-established on the small screen. So, I wanted to first prove myself as a heroine to the viewers instead of instantly becoming one. Since childhood, I thought of myself as a heroine. I always styled myself and dressed up as one. It was a part of my life to look apart from people.
I was offered a role in Koi Chand Rakh – my debut drama. I realized it was the right time to start. I felt it was necessary to transition into dramas because your lifespan as a model is extremely short as compared to other fields. I often asked myself, how long would I keep representing campaigns for a fashion label? People get tired of seeing the same face again and again on similar campaigns, similar ramps and similar clothes. We need to give new people a chance too! How can we introduce new faces in our industry if we aren’t willing to give new talent their due shot? I believe I have to play my part in helping and voicing concern over this issue.
I have been in this industry for five to six years now and never for once have my junior models belittled me. They were able to shine in fashion following my exit. If they decide to leave the industry, like I did, new faces would emerge again. That is how it is supposed to be. It isn’t fair that people remain where they are for decades without giving anyone else an opportunity.

What makes the modelling world cutthroat, in your view?
AH: Competition is in every field including acting. Everybody wants to excel. Modelling is slightly more competitive. I believe in keeping a healthy competition among my competitors. I am not negative toward people. I prove myself to others through my work instead of fighting or bad mouthing. That is why I am here. 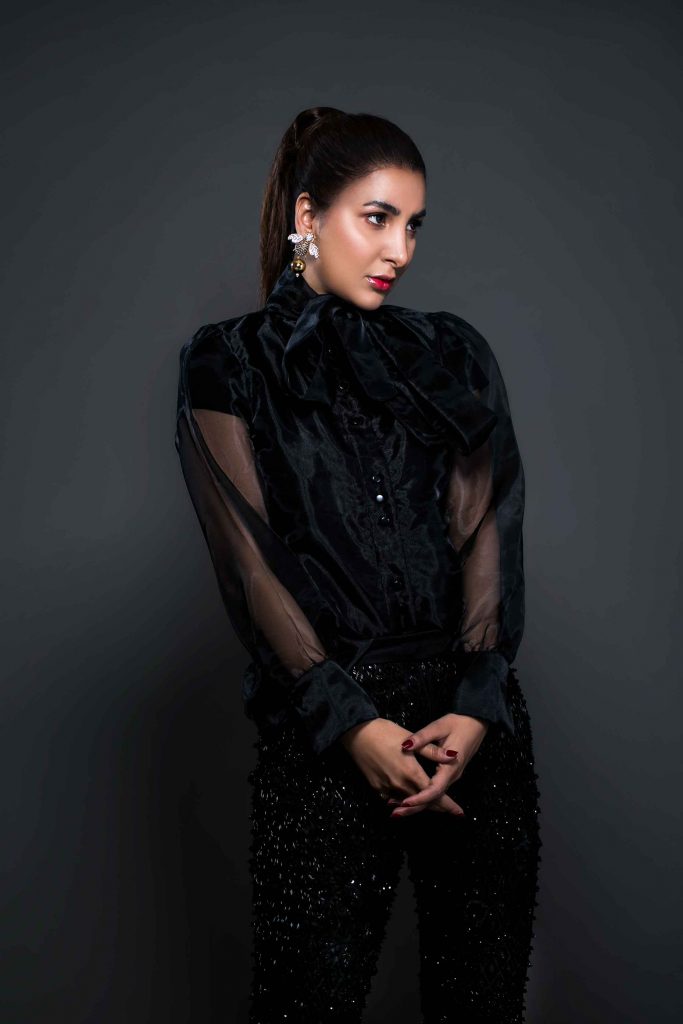 As a new, young artist, what has surprised you the most about Pakistan’s show business?
AH: I am so happy to see that more girls are making their way into the industry, be it in fashion, music or acting. I feel very happy when a young girl tries to make a name for herself. Obviously my vote is for girls because it is a big deal for us to get permission from our family members. I really look forward to their good futures ahead!

Let’s talk about Jalan. The drama garnered controversy and got banned multiple times. It was quite a stretch to show a sister fall for her sibling’s husband and ruin her marriage. The plot overall seemed exaggerated, don’t you think?
AH: Of course, Jalan was very controversial but it was a big break for me as an actor. You won’t believe it but I have had many women come up to me and say how they or someone they know have experienced similar circumstances. Trust me, I have heard these stories first-hand.
I have received so much love from people who have come up to me and hugged me for my character in Jalan. It is overwhelming to realize how people still take my character in the drama so seriously. That kind of appreciation and affection raised the weight of responsibility for me as an artist. It made a character like her tougher to outperform. This is part of the reason why I do a few dramas. If you want to work on a project, make sure it is a good one. Otherwise, opt out of it. I credit Fahad Mustafa for the success of Jalan because I remember, he approached me for the role of Misha.

Are you personally content with the kind of stories that are being told? How can our television content evolve for the better?
AH: Viewers wouldn’t want to watch drama plays if we try to change them as they are. Besides, the kind of content people find immoral, sells the most. Regardless of what Jalan was about, people loved our drama and the viewership was next level. If our audience decides to make a project controversial, the makers would feel obliged to produce similar plays. Producers want to make money out of commercialization. As actors, we don’t make extra money based on a drama’s success. Producers and channels do. In the end, actors like us get blamed for playing controversial roles but people need to realize that this is our job, and we are simply playing our part. 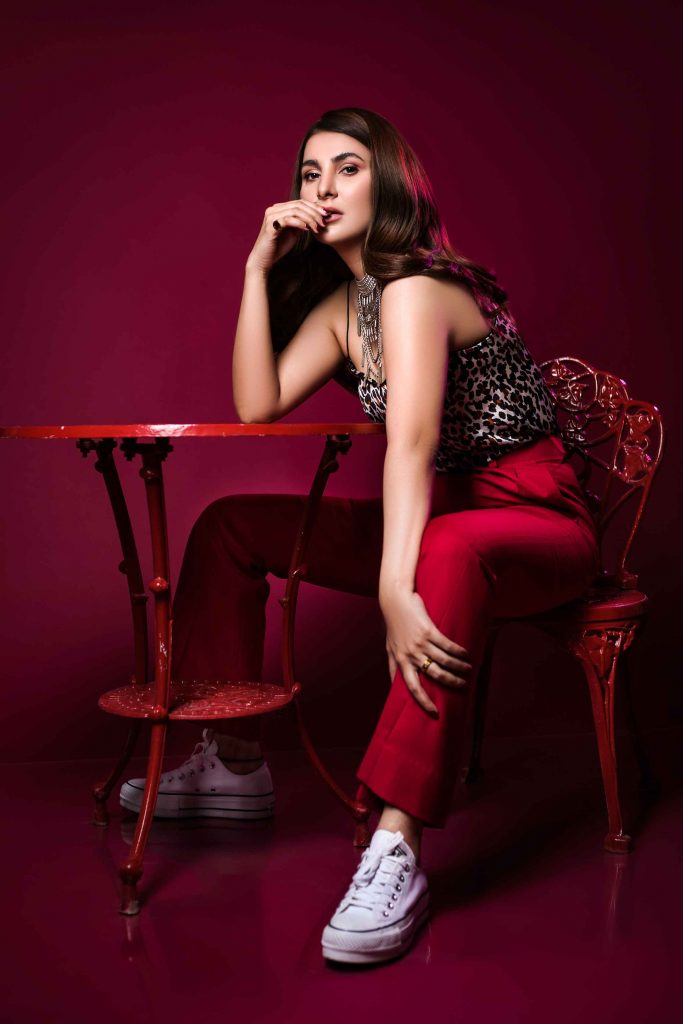 As an actor, how do you avoid being typecast?
AH: I personally don’t want to avoid it. Both, positive and negative characters give actors a lot of margin to exhibit their acting skills. I played an antagonist in my debut drama Koi Chand Rakh. I have done a variety of roles; I played a wife, a sister and a daughter so it is not like I am stuck in one particular character. For me, every role has a story.

What new projects are underway?
AH: There are three projects in the pipeline so far. Two of them will go on floors soon. I am currently reading the third script.

Which character do you see yourself playing in the future but haven’t been offered yet?
AH: There are so many characters I want to play but I am not sure if I will be offered those roles. It won’t bother me in case they aren’t. It is our job as actors to play the characters we are assigned. In a general sense, I would like to play different, challenging roles.

You have also been making waves on social media with your fashion forward outfits. What best describes your personal style?
AH: I always wear what I like. My social media life represents what I am like at home. I wear T-shirts and jeans; that is my style and people like that. I feel if you connect with people by just being yourself, they can relate to you better, and that is a real connection.

Talk to us about Areeba Habib Clothing. What made you decide to go down an entrepreneurial route with your fashion line? What new offerings does your brand have in store for women?
AH: I have a degree in fashion designing, so I always wanted to be a designer. I am not sure if I want to make huge bridal dresses going forward but my central focus right now is on making comfortable, colourful apparel for women.
My clothing line is very reasonably priced. Before launching the brand, my main motive was affordability for all. So, I don’t want to make expensive clothes. I keep things basic. I am not planning to launch a store as yet due to COVID-19. This is not the right time to set up a physical outlet for my brand. Besides, my online business is doing really well. 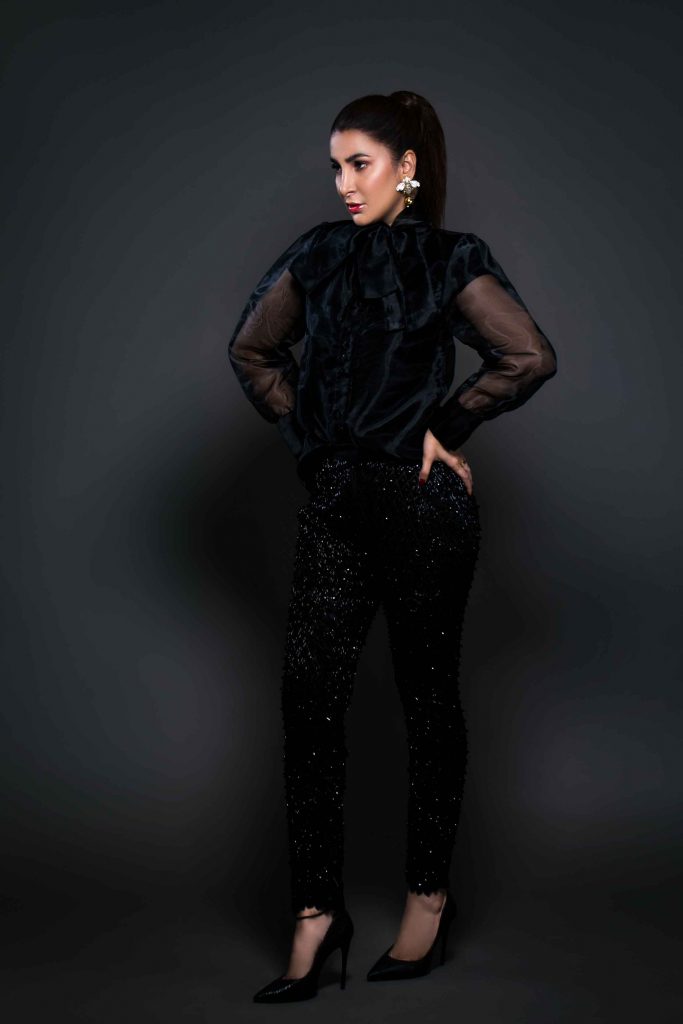 Does your clothing line cater to plus-size women?
AH: Of course! I will be including a plus XXL size for women too. It is very important to do so! My clothes are very comfortable and colourful. I have personally never given much thought to a particular size. For me, every size is a size, so I make every size! As a designer, that is my responsibility.

Describe Pakistan in one word.
Home.

Your thoughts on celebrities and brands “purchasing” followers on Instagram?
I don’t think so. All have real followers.

A personal quality you wish to work on?
Nothing.

What immediately catches your attention?
A good sense of humor!

What is the purpose of life, according to you?
Do good, good will come to you.