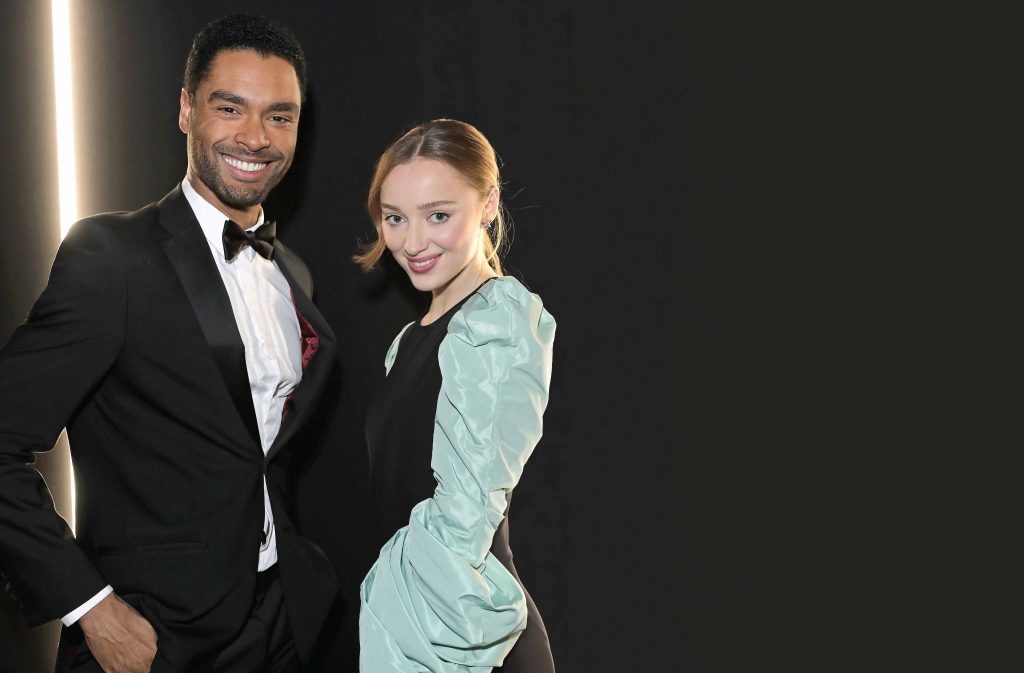 It’s the Netflix period drama taking the country by storm – Bridgerton, a raucous romp that could well be called the Regency era’s answer to the Kardashians, or Downton Abbey…but with a lot more bed-hopping!
Based on the series of novels from the same name, the show comes from uber-producer Shonda Rhimes (Grey’s Anatomy, How To Get Away With Murder and Scandal), and as well as a cast of beautiful actors, all the action is narrated by none other than Dame Julie Andrews, playing secret society gossip Lady Whistledown. “Let it be known, if there’s a scandal, I shall uncover it. And share every last detail,” Dame Julie promises.
It follows eight siblings as they work the marriage market to their favour, flitting around glittering ballrooms with witty banter and illicit liaisons.
Among them is Daphne Bridgerton, played by Phoebe Dynevor – whose mother is Coronation Street star Sally.
Daphne is introduced to the London social season in 1813, and the naive youngster is soon enthralled with the most eligible bachelor in town, the dashing Simon, Duke of Hastings (Regé-Jean Page).
We caught up with Phoebe and Regé-Jean to find out what attracted them to the show and why the couple’s romance resonates so much with modern-day viewers…

Bridgerton is such a different take on a period drama. What did you make of it when you first read the script?
Phoebe: I was so overjoyed! I am such a fan of that era and period dramas in general. And I think what really made it fascinating for me was seeing the way in which Daphne discovers her sexuality, which had been hidden from her. She has absolutely no idea what sex or romance really is. So this journey is her discovering that and I thought that was a really interesting way of portraying it. We’ve never really seen that one aspect of women in those times, where they were almost non-sexual beings, not really portrayed as having that appetite. To be able to play that was a lot of fun.

And Regé, what about you? Did you read the novels beforehand?
Regé: Not until I got the script and then I kind of devoured everything I could on the plane on the way back to work on it! That was a thrill. The show to me feels like it’s a period drama that’s been dipped in cotton candy. It’s just funnier, faster, more glamorous, more colourful. It’s a lot of fun. 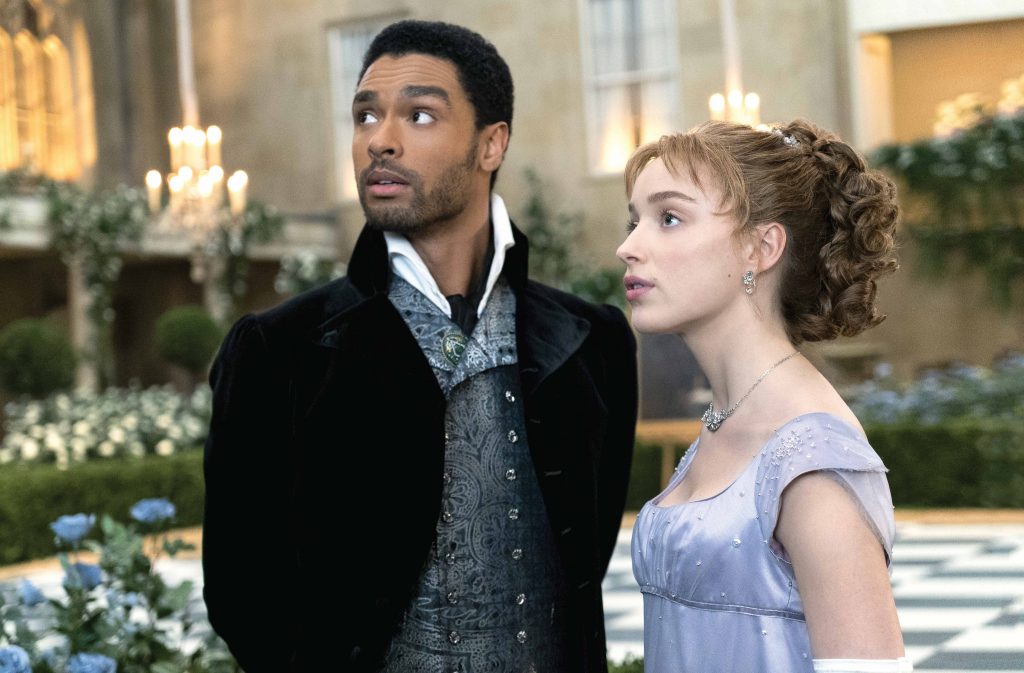 How do Daphne and Simon represent modern romance?
Phoebe: They form a real friendship and have banter with each other, which is really lovely to play and I think that’s what you don’t see when Daphne is with the other suitors – she’s not able to be herself. That’s the lovely thing about their relationship – they are both able to truly be themselves around each other and I think that’s why they end up really falling for each other. Daphne’s empathetic, she wants to know him, she wants to look after him, she’s got that female instinct. It’s lucky that Simon is a genuinely good person and has a good heart and good intentions. But I think there is something to be said for relationships where that is not the case. And so it’s exploring those themes as well, which are quite modern themes. Even though we’re filming in 1813, it’s something that we can still relate to today – love is love, people are people.
Regé: I think of Simon almost as more of an anti-hero. He’s the adversary in this that Daphne has to break down before she can reach the true heart of him.

They act as equals, unlike some of the other relationships in the show…
Regé: Absolutely, that’s the core of what’s important about their romance – they find an equal in each other, which at the time was relatively revolutionary. I think both these characters are extraordinarily intelligent, they’re both used to being the smartest person in the room. So finding someone who can go toe-to-toe with them is exciting.

What research did you do for the roles?
Regé: We were incredibly prepared in terms of endless etiquette lessons, dance lessons, horse riding and boxing! The first thing that I always do when researching any period for a role, even in the modern day, is look at what people are listening to, what the music is, what the literature is. Then, from there, what were the dances like, what’s the body language, how does that change depending on status, how does body language change depending on people’s hobbies?

You’ve done period dramas before, Phoebe. What’s different about this one?
Phoebe: I’ve done a fair few but this didn’t ever really feel like I was shooting a typical period drama. We never really knew what we were filming. We knew who our characters were and we knew what they wanted, but we were never quite sure what the show was. We would rehearse our dance sequences with modern music, with songs from Plan B and Stormzy – so we knew we weren’t making your typical Regency drama! Everything just felt more vivacious and exciting. It was exciting for me to watch the show when it was done, because it was like the first time it all came together.